Green Ronin is a small family, so usually we all pitch in and help each other with mutual projects, doing some outlining or writing or editing or proofing on each other’s lines when things get tight, so it’s always exciting and special when a new product comes out that you haven’t seen until it’s newly born and ready to go home to a loving family. For me, Fantasy AGE Lairs is one of those rare babies I never met until it was ready for the baby shower. 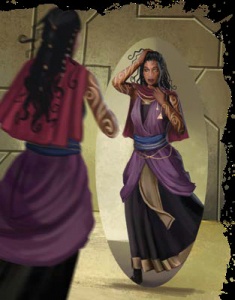 I thought it would be a cool experience to pick one of the book’s eight titular lairs at random and read through it blind and give my first impression. The d8 came up 4, so I read the Yunivircity of Taabak!

The Yunivircity of Taabak is an innovative cosmic horror landscape you can drop into your Fantasy AGE world if you like Lovecraftian high-concept horror. A Being wants to exist, but can’t yet, and so it has inspired an obsession with how to make itself exist in a single woman… or that woman’s obsession with the potential for the Being to exist made it want to exist. Causality is tricky with things that don’t exist yet. Either way, this student’s work linked her to the being’s own not-quite-existing nature, and she became less of an individual and more of a vague concept. And soon she spread that intellectual infection to her entire school, transforming the entire university into the concept of a university and putting everyone trapped inside to work figuring out how they can eventually make their cosmic god real.

The entire landscape is just concepts of things—gray blocks for buildings, green sheets for laws, stacked geometric solids for students—devoid of any personal details. It’s an adventure inside the Dire Straights Money for Nothing music video. And if you attend classes too long, you stop being you and just become another concept of a student trying to bring this god into existence.

The Yunivircity is filled with other unique beings—students, instructors, and others—who are victims and threats all at the same time, who will leave you alone if you play along, attend your classes, and help with the research… but conforming to the group eats away at your individuality, which is the only things keeping you from fading away and becoming just like them. So you’re on a timer here, trying to fit in while still clinging to your unique identity just to survive. There’s a multi-stage template that grows slowly worse, like a disease, to help measure, ironically making you more powerful the more of your self you surrender to the Yunivircity.

It’s all the worst elements of public school, distilled down to the nightmarish extreme!

So, it’s a lair, right? Who or what lairs there? The being itself is left pretty vague, like any good cosmic horror, and you can’t fight it because it doesn’t exist yet. It’s an idea trying to force itself to exist, and you can’t punch an idea in the face.

Instead you’ll have to punch the Headmaster, the original student who contacted the being, or who created the being. Let’s not go down that road again. She’s lost her identity and exists as a stereotype of a school headmaster, pushing the entire campus toward the magical, scientific, and theological breakthroughs that will create her Being. She’s got magic for days and can control the Yunivircity itself, but she also has a face you can punch. As a cool twist, there are still bits of her individuality hidden around campus, too, trying to sabotage her own efforts.

There’s also the Dean of Discipline, who’s there to make sure everyone exists as a tidy concept and doesn’t let silly things like individuality or free will stop the students and instructors from working hard toward their shared goal. Like the Headmaster, the Dean is a unique monster and a serious beatstick that you won’t beat without a plan, but unlike the Headmaster, she’s a tower of muscle and sinew and eyes who will tear you apart with her bare hands.

But the Yuniviristy is built as a sort of looming horror of conformity. So long as you fit in and surrender to fate, no one—not the instructors or the Headmaster or the Dean—even notice you, let alone attack. The real monster here is dread and the fear of losing your individuality.

Why Would You Go There?

The Yunivircity is creepy and corrupts you and is inhabited by a weird abstract demi-god faculty, so why would you ever visit it? You may not have a choice. This is a lair that can come to you. The school is constantly recruiting talented minds, dragging them into its unreal existence to convert into its vague conceptual students. A friendly scholar, or even your party wizard, might be brought into the Yunivircity as a “new student,” prompting the rest of the group to undertake a rescue mission. Or the Yunivircity might impose itself over a local school campus for a few hours or days to collect a freshman class.

Even if you don’t end up with the college of improbable engineering landing in your lap, you might visit it for the same reason heroes visit any site of cosmic power: Because you don’t want an unfathomable god wrecking up your planet! Or you might aim a little slower and just want to plunder the Yunivircity’s library for rare books or magic, or to save the only person in the world who knows a vital clue for your wider campaign. I can easily see the Yunivircity being a terrible place you need to revisit repeatedly in your campaign to learn new clue or find forbidden knowledge, learning a little more about how it works each time until you’re powerful enough to end its threat.

I know, I know! “You’re a Ronin! They pay you to say you like it!” Well, for what it’s worth, I’m reading and writing this while on vacation, visiting my parents’ humble swamp shack in rural Florida. I’m spending part of my vacation to check out a book I’m excited about as a GM. Is the Yunivircity a little niche? Yeah. Is it going to fit every campaign? Probably not, but looking back at the table of contents, Lairs includes cool fantasy tropes like a ghoul castle and a dragon’s lair (sadly, no Space Ace), and I’m glad there was room for weird alongside the standard tropes!

Would *I*, Crystal the Gamemaster, ever use the Yunivircity? Absolutely! It’s cool and weird and gives you game mechanics for a lot of cool horror concepts! Even if I didn’t use this lair as written, I can strip-mine this entry to build my own version.

And I get the distinct impression the Yunivircity of Taabak would work incredibly well in Blue Rose or Modern AGE as well, maybe even better than for a general Fantasy AGE campaign! I guess my players will find out.