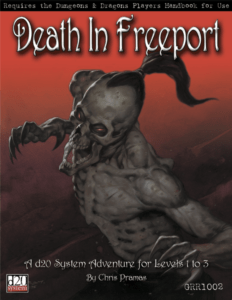 Last time I wrote about the pre-history of Green Ronin, basically covering my start in the industry and how I navigated the 90s. When I left off the story, I was working at Wizards of the Coast. The first 18 months or so I was at WotC, I was working in what was still called the TSR Product Group (this later changed to Roleplaying R&D), writing various books for D&D and one for Alternity. During that period, WotC decided to spin up a miniatures division. They were looking to compete with Games Workshop, publishing both games and miniatures to support them. D&D miniatures, which had a long history back into the 70s, were also an important part of the plan. If you follow me on social media (I’m @Pramas on Twitter) you know I’m a huge miniatures fan, so it’s no surprise that I determined to join this effort. It took some doing, but I eventually landed a spot on the miniatures team and spent the rest of my time at Wizards working on the game that was eventually released as Dungeons & Dragons: Chainmail.

Chainmail is a huge story in and other itself, but I’ll leave that for another time and place. What’s important for our tale is that after some months working on the miniatures team, I found I missed doing roleplaying work. This brought my punk DIY instincts to the fore again, and I thought, “Well, why not start my own side company and keep a finger in the RPG pie?” In February of 2000, I decided to take this from idle thought to actual thing. I set up the company, got a bank account, and began to make plans. The first thing I wanted to publish was Ork! The Roleplaying. This was a lighthearted beer & pretzels RPG (now in it’s second edition!). It was based on some fun campaigns my friend Todd Miller had run back in NYC. I had Todd write up “The World of Orkness” while I designed the rules system. I slated it for a July release at the Origins game convention.

Meanwhile, back at Wizards, the Open Game License and d20 System Trademark License were first being proposed. The idea was to provide other companies a way to publish D&D compatible material. The fact that it was a free license created a lot of skepticism within WotC. I remember sitting in a big meeting with folks from R&D and thinking about the possibilities this could offer though. One point made was that WotC had difficulty making money off adventures, and this was something smaller companies might take up more profitable. Another point was that WotC was a big company and turning the ship to react to trends was a slow process. I thought, “Well, my company is small and agile! I should give this a shot.”

When the OGL and d20 STL were announced publicly, there was also a lot of skepticism from established RPG companies. Some saw it way to kill competition to D&D. Green Ronin, of course, had no established game lines to worry about, as Ork hadn’t even been published yet. I knew that the Dungeons & Dragons Third Edition Player’s Handbook would launch at Gen Con 2000 (along with some D&D minis my group was doing), so I decided to release a 32-page adventure that same day.

Working at Wizards by day did grant me some advantages. As a part of R&D, I had been involved in the playtesting and debates of Third Edition so I had a good grasp of the new system. I also knew WotC was taking a “back to the dungeon” approach for adventures. I decided, therefore, to offer something different: a city adventure. This would have the added bonus of creating a setting that could be expanded upon later. Now I didn’t want to do Generic Fantasy City #57, so I pulled some other influences into it. So what do you get when you mix D&D with pirates and Lovecraftian horror? Freeport: The City of Adventure!

That spring I wrote the adventure Death in Freeport. I wanted a cracking cover for it, and I thought it’d be great if I could get something by Brom, as he’d done the cover art for my AD&D book Guide to Hell. This was all done on a shoestring so I could hardly afford a new Brom cover, but I talked to him about it and we worked out something else. He had done a bunch of art for a collectible card game a few years before and I was able to license a piece from that for only $400. Later, I made a flier I taped up around Gen Con promoting this new adventure “from the writer-artist team that brought you the AD&D Guide to Hell.” 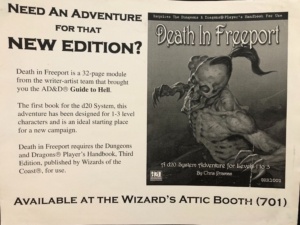 Need An Adventure for that New Edition?

I worked my contacts for the rest of the production of Death in Freeport. Nicole Lindroos, who had done the graphic design on the original edition of Vampire: The Masquerade, did the interior layout. Hal Mangold, who I had met when he was working on Deadlands at Pinnacle, did the cover design. The three of us would become partners in the company just a couple of years later. For interior art I tapped Toren Atkinson and Chris Keefe, who I had worked with at my first company. WotC friends Jennifer Clarke Wilkes and Todd Gamble did editing and cartography respectively. The whole thing came together very quickly because we had a hard deadline. We got the files to a Chicago printer in time to have it done for Gen Con. I took a huge gamble and printed 10,000 copies (pro-tip to small publishers: don’t do this in 99% of circumstances!). The printer actually drove copies up to Milwaukee for us and dropped them my hotel so we’d have them in time.

In July we released Ork as planned at Origins. It was modestly successful, pretty much what you’d expect from a new small publisher and their debut game. A month later we released Death in Freeport and that was something else entirely. It was an instant hit. D&D Third Edition was, of course, the big news of that GenCon and there were only two adventures you could get to go with it there: Death in Freeport and Three Days to Kill by Atlas Games. Just walking around the convention and nearby hotels, I ran across groups (sometimes just sitting on the floor) playing Death in Freeport with their new Player’s Handbooks. When distributor orders came in, it just confirmed what I’d already seen at Gen Con: the gamble had paid off!

By the fall of 2000, it was clear that Green Ronin had the potential to become more than a side project. More on that next time!

The Pre-History of Green Ronin Publishing