The release of The Lost Citadel Roleplaying is probably cause for curiosity if you didn’t back the original Kickstarter. In essence, The Lost Citadel is about a fantasy world, Zileska, that has been transformed from something very similar to many traditional fantasy worlds (though with a greater emphasis on non-Western influences than most) by the rise of the undead—simply called the Dead in the setting—to an urban survival horror setting. And just as the world has transformed, so too have our heroes. Even though this is a setting for Fifth Edition, races, classes, magic, and more have been changed by the Dead. Here’s how. 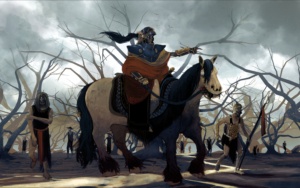 The classic theme of survival horror is that it isn’t about the evil of the creatures coming after you, but that locked within survivors. Will you turn on your friends to live another day? Unfortunately, that kind of messes with the dynamics of traditional fantasy games, where we want the party to cooperate. The Lost Citadel’s solution is Redoubt: the last city in the world, where survivors banded together to hold off the Dead. The city is mostly cramped and filled with political chaos, as communities from many cultures protect their traditions and advance their interests. In effect, this takes the classic theme and makes it a slow burn, taking place across multiple enclaves instead of a single group of survivors. That way, the PCs can feel the desperation and threat of betrayal without having to watch for—or plant—knives in each other’s backs.

This is not to say there’s no room for personal conflict. Evil is pervasive in The Lost Citadel. It infects the land. It causes people’s sins to poison the earth. It corrupts magic itself. This manifests in the form of the Woe mechanic. Woe may give a living person an unnatural pallor, or cause natural animals to hate the sufferer. In can come from many sources. Evil acts concentrate Woe within someone, but it doesn’t provide an easy way to “detect evil,” because Woe also springs from the spiritual damage caused by contact with certain undead, and from casting magic without using a careful ritual. Woe strikes the good and bad alike, and if too much of it gets in you…death isn’t the end. Consequently, the book presents a variety of original magic-using classes, and even a variant of the monk class, that have adapted to a world claimed by Woe.

Nevertheless, there’s still room for more of a classic 5e experience. Dungeons? Redoubt was built by dwarves—it’s full of tunnels and fissures. The new masters of the city don’t know all its secrets, and often need adventurers to clear and map lost storehouses, secret foundries, and even cursed tombs. But the bigger, more dangerous quests lie outside the city proper. That’s where the Foresters go. Even with its walled farms, Redoubt isn’t quite self-sufficient. The city needs to do logging, find rare materials left behind during the great exodus from the old nations, and patrol to see if the Dead are gathering in significant numbers. The Forester faction does that job, and needs more than rangers to help. The wilderness can be hauntingly empty or teeming with the Dead, and it’s hard to know which is which until you venture forth. Besides, every other city has fallen, to every building outside the city’s a dungeon, too.

Like an absolute genius then, I’ll actually put the vital info last. The Lost Citadel Roleplaying is compatible with and requires the 5e PHB, DMG, and MM. Here’s what you get: