The Lost Citadel Roleplaying is out (currently in PDF, but coming to print as soon as our COVID-19-altered industry can manage). This setting for 5e presents a world where the Dead have risen, and the living survive behind the walls of Redoubt, a great dwarven city seized from its original rulers. In Redoubt, many cultures mix, each trying to maintain its traditions in a new, desperate environment, while Woe—the power of corruption brought by the Dead—manifests in unquiet corpses and magic alike.

While The Lost Citadel is designed for 5e, our Kickstarter campaign unlocked a stretch goal promising rules to use the setting with our own Fantasy AGE roleplaying game, and those rules are currently in layout ahead of their eventual release to backers. They’ll also be made available in PDF form. I was selected to write them as I happen to have experience working on both The Lost Citadel setting (I wrote a story for the anthology and did both rules and setting work on the roleplaying book) and Fantasy AGE, I became the designer for this particular supplement.

One thing I tried to do was to formulate The Lost Citadel as a Fantasy AGE setting from the ground up. Instead of simple conversion rules, the character options, equipment, magic, and the rest were done from a Fantasy AGE perspective. For example, custom Fantasy AGE backgrounds, compatible with those in the core book, provide a history for your character specific to the setting. This approach has the added side effect of adding a number of things that might be of interest for general Fantasy AGE players and GMs as well, such as the 17 specializations available. While a handful have been adapted from the Fantasy AGE Companion, a number of them are brand new, such as the Witch talent, previewed here. 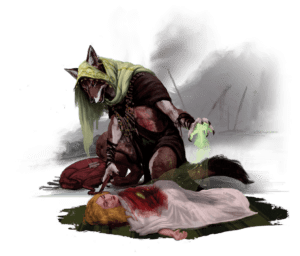 You represent the remnants of rural folk wisdom traditions from across Zileska. In the age of the Dead, the power of nature has been twisted and suppressed, but your studies and meditations have revived ancient bonds, and may even evoke the powers of nature spirits that have long lain dormant in the land. Herbalism is a mandatory field of study. Witches are often employed by the Foresters, as their knowledge is of use to the organization, and it provides an opportunity for them to explore the wild beyond Redoubt.

Requirements: Must have Intelligence and Constitution of 2 or higher, the Intelligence (Natural Lore) focus, and the ability to cast spells using magic points, such as by being a mage or Arcane Initiate.

You study the ways of nature.

Novice: You can speak to natural animals, and they can communicate with you without vocalizing, though you hear them speaking back to you. You may use Communication tests to influence animals you communicate with, and add your Animal Lore focus bonus (typically +2) on top of any other Communication focuses bonuses you have for them.

Journeyman: You can charge non-metal weapons with natural energy. This requires an Activate action, which charges one weapon that has no metal components for the duration of the encounter. If this is a ranged weapon, the ammunition can incorporate metal, but not the weapon itself. When activated and used by you, your weapon is considered magical for the purposes of harming creatures vulnerable to magic weapons, and inflicts an additional 1d6 damage.

Master: Nature is your ally. Your movement is never impeded by natural terrain (brush, mud, etc.) that would otherwise slow you down. Furthermore, you can use a minor action to create a space up to 4 yards by 4 yards in diameter up to 20 yards away, where natural impediments reduce everyone else’s Speed by half. Any creature that moves through this space or ends their turn in it takes 3d6 penetrating damage inflicted by the poisonous plants and wildlife that arise in this spot. You are immune to the hazards created by your own space, as is anyone you designate, as long as you can perceive them as they enter the space. You can create a space like this as often as you like, but creating a new space eliminates the old one.