Last year, Nisaba Press announced that they’d acquired the rights to rerelease my first novel, Sacred Band. Today, I’m thrilled to announce that we’re revealing the incredible new cover as well as opening pre-orders for the new edition, both in print and ebook in the Online Store, as well as on Amazon.

This new second edition of Sacred Band has been treated to additional caretaking behind the scene, including a re-write of the original final chapter and an epilogue chapter of entirely new material! It is, without question, the book I always wanted it to be.

As much as I love the cover from Sacred Band’s first edition (it is, after all, the cover of my first novel), this incredible piece of dynamic art from the legendary Melissa Uran really captures the spirit of my novel.

When I first started writing it, I turned to my long-time friend Melissa and commissioned a set of images of each of the members of the team, just to help me solidify what they looked like as I wrote. Melissa’s gorgeously detailed art has been a part of Sacred Band from the beginning, and I cannot tell you how over the moon I am that it now bears a cover from her as well. 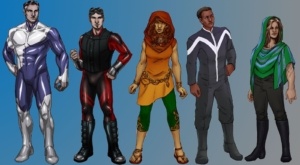 There’s lots more Sacred Band goodness on the horizon. Thank you so much for joining us on this journey!