The past few months have been some pretty hard work finishing up the upcoming Blue Rose sourcebook Aldis: City of the Blue Rose. As a developer and a cartography nerd, I love a good city-focused setting book, so being able to help detail the wondrous and near-idyllic capital city at the heart of the Blue Rose setting was a dream come true. 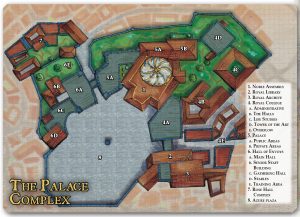 It’s been a great deal of fun guiding writers through creating places, and then seeing those places turned into beautiful, full color maps that inspire as much as they inform. The amazing Liz Courts has lent her talent and vision to this effort, and the results are – as I hope you’ll agree – simply stunning. 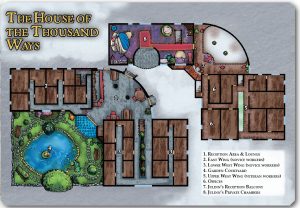 To demonstrate the scope and variety of maps, I’m taking this opportunity to show off the Palace Complex, heart of the Aldin government and home to the Sovereign, Queen Jaellin; the House of the Thousand Ways, a very upscale pillow house where Aldinfolk can find healing and companionship in the arms of the specialists of the House; and the village of Dorwine, a small settlement in the countryside that surrounds the city of Aldis. 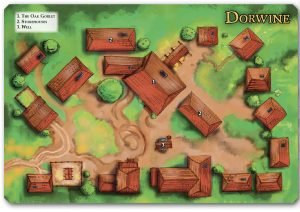 Aldis: City of the Blue Rose will be available for pre-order later this month!