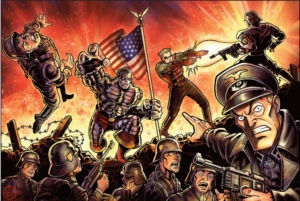 Green Ronin have launched our first official Patreon, providing new game material for Mutants & Masterminds 3rd Edition! You told us you wanted even more villains for Mutants & Masterminds and we listened, reaching back into the archives to revitalize a ton of fan-favorite villains from previous editions who haven’t yet appeared in the current version of the world’s #1 superhero roleplaying game. Our first series of updates are everyone’s favorite band of sanctimonious kid psychics, the Psi Family!

Professor Psi has been a longtime rival of Dr. Atom and the Atom Family, and his children were a constant thorn in the side of the Silver Age team. Now that a new generation has been born, he’s become more determined than ever to prove the superiority of psionic humans and pave the way for a world where he and his progeny stand over mankind! And to give you a taste of what you can expect, we’re sharing a preview of the first release, the telekinetic powerhouse Argent, right here! 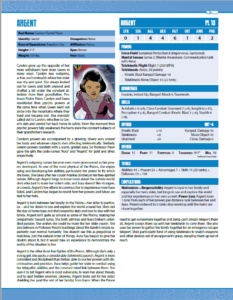 Check out this FREE PDF preview of Argent!

Every single week, you’ll get a brand new villain updated and ready to play in your 3rd edition M&M game, with villainous teams released as series so you won’t miss your favorite members. While we’re starting with the Psi Family, a classic from Freedom City 2nd edition, we’re not limiting ourselves to that single book, and we’re eager to hear what you want! Need the two-fisted Contenders updated for your heroes’ next bout in the Circuit Maximus? Want to see the Golden Age Crime league for your historic campaign? Let us know! Every month we’ll release a poll asking you what we should convert next, and we’ll look at the comments to decide what to put up for vote!

But M&M is more than just villains, and the more people contribute to the Patreon, the more time we can justify dedicating to it every month. We’re already halfway to our next Power Level, where Steve Kenson and I will begin releasing monthly articles zooming in on fun elements of Earth-Prime you can use in your campaigns, like individual stores and businesses, colorful personalities, urban legends, and criminal groups. The next goal after that DOUBLES our weekly releases—that’s two villains every week at no extra cost!

And of course the Patreon is a chance for our fans to make their own mark on Earth-Prime itself! If you donate enough, you can join in on monthly developer chats to ask questions and get advice. And if you pledge at our top patron tier, you become a part of Earth Prime as we name-drop you somewhere in an official Mutants & Masterminds release as a bystander, business owner, sidekick, scientist, hench-person, or other colorful figure within our world! If you’ve ever wanted to own that comicbook store in Freedom City or run a mercenary league in Emerald City, now’s your chance!

The Patreon is just beginning, but it marks a new era in providing hyper-focused material to gamers that zooms in on your interests and needs without needing to pick up a full book! We hope you’ll join us and enjoy!