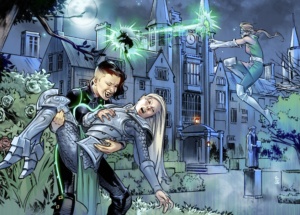 It’s the most wonderful time of the year: Halloween! And once again, we here in the Mutants & Masterminds office are offering a thematically appropriate adventure for the holiday season! Following on the tail of Monster Mash-Up, we offer the newest Astonishing Adventure: Bite Club! Unlike previous Halloween adventures, this installment is specifically a hero high caper, intended for PL 8 heroes who attend the prestigious superhero school known as the Claremont Academy!

Over the course of Bite Club, the heroes discover a coven of vampires threatening their school, but who are they and why threaten a school full of super-powered kids? Bite Club takes place over just a few days and focuses on the growing drama and lurking threat posed by children of the night. But if you want to expand Bite Club for free, you can cannibalize our previous adventures to flesh out the perfect adventure for the spooky season.

You can use Monster Mash-Up as written as an opening scene for Bite Club. Several Claremont students attend the Laugh at the Dead show, including the heroes and the supporting cast. The hallway confrontations from Scene 1 of Bite Club can either happen before the show begins or take place in the stress and chaos after the heroes battle Scream Queen and Madame Macabre.

Using Nothing to Fear

Nothing to Fear ends up being a more useful collection of scenes to supplement Bite Club than an adventure you can drop into the middle.

Fearmaster makes a useful tool for the adventure’s mastermind, who sics him on the school once anyone begins investigating the vampire attacks. The emotion-manipulating supervillain plants his gas dispensers across the campus to cause widespread chaos. The mastermind hopes the young heroes will assume the vampire attacks were yet another fear-induced hallucination, and it also allows him to study the young heroes’ emotional reactions.

Doc Holiday may be a young student at the academy or serving as an intern, only to have his magical powers triggered by Fearmaster’s gas. But he might instead appear later, emerging on Halloween to try and usurp the growing vampire clan to serve him, using their stolen bio-energy to fuel his empowered state rather than the fear and panic of the parade crowd.

However you choose to run Bite Club, have fun and enjoy your Halloween!