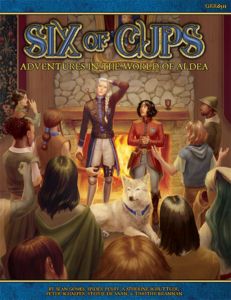 Six of Cups is Blue Rose’s second anthology of adventures (the first was, of course, Six of Swords). Of course, at center, this book is about providing a set of interesting, self-contained adventures for Blue Rose campaigns. Perhaps your group will play Sovereign’s Finest, traveling the lands, playing through all of these. Or, one or two might form the basis for a new campaign, or at least an arc within one. But that’s not all Six of Cups has to offer. This anthology does a couple of things – and some of them were even intentional.

Themes: The Suit of Cups

From the get-go, I wanted the stories in Six of Cups to be about emotions and relationships. In the minor arcana of the Tarot, the suit of Cups focuses on the connections between people and the emotions that both inspire and come about as a result of those. It’s the “emotions that run deep” suit (in comparison to the “emotions that burn bright” of Wands).

Above everything else, Blue Rose and the genre of romantic fantasy are about those ties, and I wanted a set of adventures that expressed that. From the connections between orphans in Witching Weather to the desire for redemption in Out from Exile to the questions about compassion and mercy at the heart of Hemlock’s Bane, the tales in Six of Cups all center on the themes central to this suit.

Gazetteers: Around the Kingdom

The Blue Rose AGE core rulebook is a whole lot of book. Even so, we had to paint with some fairly broad strokes while describing the Kingdom of Aldis in that book. Now, we had the chance to get a slightly more zoomed-in look in Aldis: Kingdom of the Blue Rose, and we decided we weren’t quite finished doing so.

One of the guidelines given to the authors of Six of Cups was to include a gazetteer section that described the place in the kingdom where that story takes place. The intention, of course, is to help make the book useful even beyond the adventures it includes. Find in these pages the major cities of Elsport, Garnet, and Lysana’s Crossing, as well as Khaldessa in the central Aldin valleys, Hemlock in the northern Pavin Weald, and the Scatterstar Archipelago!

Happy Accidents: The Storm of the Century

One of the things I asked of our authors was to send me proposals for their adventures and gazetteers. In short order, it became apparent that (perhaps inspired by the elemental association of Cups with water) no less than three of the stories feature a massive coastal storm. Rather than require some of the authors to change their ideas, I thought I could include them all to highlight one of the interesting ways to use generally unrelated adventures.

Finding a common thread to run between adventures is an awesome way of building a sort of “accidental” campaign. The tumultuous weather plays a role in all three of the stories, and they are not written as being interrelated. An enterprising Narrator might, however, come up with some connecting concepts to help tie them together. Perhaps these are all part of a single, major storm system of some kind, a sort of terrifying storm of the century to strike the southern coast of Aldis? Or, perhaps there is something (or someone…) nefarious at work, hurling storm after storm into the world.

There is a lot that might be done with the contents of Six of Cups. And that’s not even including the new Specializations (Storm Rider and Marsh Shaper), or even the devastating Arcane Lightning arcana knack for those who wield the Weather Shaping arcana! Join us, with an open heart and a sense of courage – we’ve got a lot more stories to tell.

Six of Cups is available now for pre-order here, and don’t miss out on that $5 PDF add-on! As well as on DrivethruRPG!