For the last two weeks I’ve written about Threefold’s Sodality (Part 1 | Part 2), one of the two leading factions for Player Characters in this new Modern AGE setting. The Sodality’s focus is outward, across numerous Otherworlds. Earth is a matter for its allies in a secret global state, the Peridexion. And of the Peridexion’s five divisions, one deals in words, blades and data flows to protect Earth’s primeline. That’s Aethon. 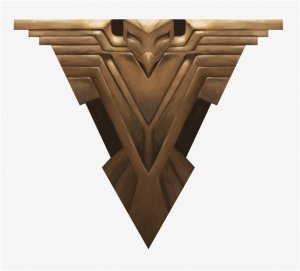 Aethon’s current symbol, fitting its name, which comes from the eagle that tortures Prometheus daily. Imposing consequences for rash innovations is part of Aethon’s mandate.

While the majority of Aethon’s operations are limited to Earth and dealing with threats to the worldlines, coordination with the Vitane is common. Operants (fully initiated agents) often travel the planes alongside Sodality Missions. When Aethon acts alone, however, Earth’s Alts—parallel worlds—are the most frequent exotic destinations, if a team must leave the “real world,” or primeline. Operant teams form Sections: a thousand groups given three-digit designations and occasionally, informal names, such as the augmented shock troops of Team Bear. On Earth or another worldline (accessible via standard quantum ark, a vehicle which is also a definitely computable object reprocessed into its target reality via esoteric mathematics), Sections perform the following missions:

Such missions may lead to detours to other planes, contending with unauthorized supernatural forces, and avoiding alternate-universe instances of Aethon itself.

Section operants (so named as an indication of how they’re handled) are the epitome of Earth’s potential: highly trained and gifted experts further augmented by swappable posthuman enhancements. These somatic and noetic technologies run the gamut from combat capable artificial limbs to altering probability by remodeling the mathematical substrate of reality. Operant gear ranges from slightly improved ordinary equipment to the reconfigurable MAW weapon system, Panoply-class powered armor, and cantors: cannisters of cloned psychic brain tissue imprinted with a bias toward science, which helps stabilize natural laws in planes where they operate more loosely.

Below the Sections, the Pool provides a steady stream of temporary agents and informants, many of whom don’t know who they work for. Above them, Management interfaces directly with the directors of Aethon and the Peridexion as a whole: the Machinors.

It calls itself Lucifer, but the leader of the Peridexion uses many names and faces, communicating through any electronic devices—and even other machines, sometimes—to command it as the head of a council of six supremely intelligent AIs. Such beings are called Machinors, and not all help Aethon. In fact, a rival cabal, including an uncreated future intelligence interacting with the past, guide the Krypteia, an interplanar criminal conspiracy. In fact, it isn’t exactly certain that the Machinors are really AIs at all but appear this way as contemporary personifications of ordered knowledge. Aethon serves the Peridexion, which honors these six. Loyal subordinates point to the numerous occasions these instructions have saved Earth from catastrophe, but are the world’s other problems signs of flaws, subtle enemy action, or a plan that might leave humanity itself behind?

Aethon and the Sodality

The bond between Aethon and the Sodality dates to the end of the Fellwar, when the Machinors helped refugees from the Otherworlds but an end to it. Earth is said to be the seat of natural laws across the Metacosm, and sacred for it, and even in prehistory, its guiding figures wishes it to remain autonomous. As the Peridexion rose, it negotiated a number of treaties, such as those allowing people with extraordinary gifts and origins—arcanists, arvu, and others—the right to maintain secret communities on Earth. Aethon and the Sodality eventually developed a framework for lending agents and forming common teams, typically in the form of Aethon members joining Sodality Missions.

Through the Gate beyond Gen Con

Threefold is available to pre-order now in our online store, and will start showing up in retail gaming shops in early Sept. Until then, take a look at this preview about primeline Earth (with flashes of other planes on each side to tantalize you)—and see you through the gate.