We are happy to announce there is now an official Fantasy AGE character sheet on Roll20. A few weeks back we did a soft rollout of the sheet to get some initial user feedback. Since then, we have addressed any critical issues, as well as some under the hood updates that were required. To celebrate the official release we are rolling out not one but two Fantasy AGE adventures! These are Fantasy AGE Encounters: The Children’s Crusade, and Death in Freeport AGE edition. 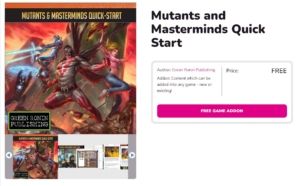 On the supers side of the house, we recently released the Mutants & Masterminds Quick-Start. This gives you everything you need to give M&M on Roll20 a try, complete with a super hero slugfest between the Rook, dark-winged detective of Emerald City, and his foe the mutant Pack-Rat! Best of all, it is totally free! So, if you ever wanted to try out M&M on Roll20 here is a perfect opportunity.

Along with the Mutants & Masterminds Quick-Start, we have a number of Astonishing Adventures and Danger Zones which recently made the super leap to Roll20:

Now a sneak peek of what the digital Ronin team has in the works for 2023! We are looking at porting Fantasy AGE Lairs, more M&M Astonishing Adventures, as well as rolling out a M&M Hero Archetype pack. This pack will come with 20 prebuilt Heroes so players can jump in and play right away. Token packs, map packs, and Game Master kits for our various game lines are in the pipeline along with a few other surprises to be announced closer to their release. Last but certainly not least, the team is actively working on Cthulhu Awakens for Roll20, with the official character sheet coming soon. You can even  pre-order the Roll20 Edition of Cthulhu Awakens on Backerkit NOW!