The Mutants & Masterminds SuperTeam Handbook, the newest addition to the 3rd edition lineup, is just around the corner. The text is finished. The layout is finished. At this point we’re just waiting on the final art and proofreading! In just a few weeks, it’ll be in your hands, ready to help your table get more out of their team! 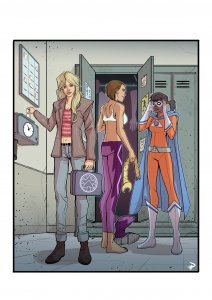 The SuperTeam Handbook also marks the last leg of John Leitheusser’s prodigious run on Mutants & Masterminds, which started way back in 2nd edition and included the DC Adventures Roleplaying Game back in 2010. This book was his vision and his last product pitch for the line, and I’m happy he chose me to help usher it through to completion.

“But Crystal,” you say,”My group is already a superteam! We’re a team, and I think all my friends are just super, ergo…”Okay, yes, you’re friends are totally super, but here me out: Are you a superteam or a SuperTeam? Because there’s a difference. One looks way better on T-shirts. And you know what T-shirts are? They’re a quick and easy team uniform! Now you match. You’re even more of a team. Boom!

Too much coffee. Let’s try this again.

Most RPG books are aimed and providing plenty of cool stuff your can do as a solo character, but most RPG groups play as teams. You’re not the only cool kid on the field. The SuperTeam Handbook looks at the awesome stuff you can do together as a group, from practical concerns like sharing points to build better HQ to drama-rich character interactions and personality conflicts that’ll just churn out those delicious Hero Points we all love. It’s a book that doesn’t just assume you’ll all work together as a team, but asks why you all work together, and how well you function as a group, and what do you do to stand out as a group. The player section introduces tactical and personality roles to help you flesh out your character’s own role as well as how well they mesh with other characters on the team and how they approach combat. It’s important to remember that your psychic doesn’t need to hit as hard as the brick or the living gout of elemental plasma; you pull your weight on the team your own way, and that can also be healing, buffing your allies, protecting people, or heckling the villain; they don’t call him “Robin, the Boy Distraction” for nothing!

“Ugh, but Crystal,” you say, forgetting I cannot hear you and this was all written days ago, “This all sounds like that icky story games, improv stuff. Where’s the beef?” Dude, chill. There is plenty of crunch for you lovely crunch-monkeys, too. The SuperTeam handbook introduces team templates so everyone can pool their resources to buy cool jets, submarines, and asteroid bases. And to make that process easier we also introduce plenty of cool jets, submarines, and asteroid bases. Behold!

There are also several new powers built with group functionality in mind, new team maneuvers to test out, and new advantages to help define what you can chip in to your team’s joint efforts.

The meat of the SuperTeam handbook is over 100 pages of new, ready-to-play superheroes, spread across eight different SuperTeams. Each team contained 4-6 members as well as a four-page introduction with information on their background, their shared resources, and plenty of story hooks for Gamemasters to pick up and run with, as well as a team nemesis to face off against!

The teams in the SuperTeam Handbook are “soft canon,” which means they’re there as a guideline for players and Gamemasters. Every team is assumed to exist somewhere within Earth Prime, but the rosters and statblocks presented are aimed at players rather than at being perfect expressions of their role and history. You shouldn’t feel like the version of UNQIUE presented in this book is the One True UNIQUE that must always exist in Earth Prime. If you like the team concept and guidelines but not the characters (as player character heroes or NPCs), feel free to tweak them or toss them out and substitute your own. The SuperTeam Handbook is a toolkit on every level, not a definitive reference book.

Here’s the complete list of which teams will be showing up in the SuperTeam handbook, but you’ll have to wait for next week to learn the details of who’s who: