Whether you are a veteran GM who crafts every campaign world and adventure from scratch, a newcomer to running games who is just trying to get through a published adventure, or someone preferring any of the hundreds of possible in-between styles of gamemastering, sometimes you realize your encounters are in a rut. It may not be your fault—many GMs run published adventures for lack of time to create all their own content, and even for GMs who make a lot of custom adventures, players can often get really good at determining how a specific game works, and cutting to the solution of any challenge much faster than expected. Even if neither of those issues is a problem, sometimes you realize a player has built a character to be good at something that never comes up in play… and they feel cheated for not getting to do the kind of adventure they are prepared for.

Regardless of why you think your existing adventure toolkit isn’t doing everything you need it to, and no matter the game system you are using, it may be time to shake things up with a complication. Or a dozen complications. 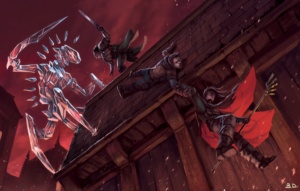 There are a number of very simple complications you can use to change the feel and flow of the RPG sessions you run. Here’s three that don’t take much advance work or thought.

Add Restrictions: If the players have gotten good at killing foes, require them to drive off threats without seriously hurting anyone. If they are masters of out-talking competitors during negotiations, make them argue their case next to a waterfall so loud no one can hear anything. If a single character is the best hacker the world has ever seen, set up the need to get information during a complete blackout when no computers are running. If the players’ favorite tactic is setting everything on fire, make them fight underwater.

The advantages of adding a restriction is that it doesn’t change the core rules of the game, it just makes players tackle a problem with some of their options off the table. You shouldn’t do this often—then it’s just shutting down character abilities—but there’s nothing wrong with forcing players to be flexible now and again.

Add Hindrances: While a restriction is specifically something that takes away some of the players’ normal options, a hindrance is something that makes the challenge of the encounter more difficult by adding new elements that can cause problems. If the PCs can sneak into any secure site anywhere, make them do so with an angry songbird in a cage they can’t muffle. If they normally bully citizens into giving them what they want, make them carry out their investigations with a bigger bully the citizens already hate. If they are experts at ranged combat, have a fight in a corn maze, with strong winds and torrential rain reducing visibility.

Add A Twist: Don’t go all M. Night Shyamalan about it, but sometimes the situation not being exactly what is expected is a great complication to throw at players. Perhaps the “attacking” wolves are just running from even bigger monsters right behind them. The crime family not only capitulate to the PCs’ demands they lay off a neighborhood, they ask the PCs to help them go fully legit. The final lock on the dragon’s vault is a sleeping cat you have to move without waking.

Rather than just adding complications to an encounter’s normal challenge, you can add an entire secondary challenge of another type. If the encounter is a fight with a band of highwaymen, perhaps a group of mercenaries wander by and the bandits try to recruit them as reinforcement while the fight is already underway. Now in addition to the initial challenge of the combat, the PCs must deal with the secondary challenge of a negotiating while the fighting is ongoing. If the PCs were trying to break into a vault before the next guard shift comes by, perhaps they discover previous thieves have already rigged the vault with a barrel of gunpowder on a lit fuse, and now both problems have to be handled at the same time.

A secondary challenge can be a great way to allow characters who aren’t good at the type of encounter as the main challenge (or players who just don’t care about that kind of encounter) to get some time in the spotlight of attention anyway. If you have a complex puzzle lock with riddles, and that kind of challenge bores one of your players who has a combat-focused character, adding a mini-secondary challenge can give them something to engage with while the other players tackle the puzzle lock. Perhaps the lock is also haunted, so ghosts of past (unsuccessful) lockpickers materialize and attack every few rounds

When adding secondary challenges and complications there is often a temptation to make sure the difficulty of overcoming them is tied to how crucial it is they be overcome. That’s pretty standard design for the main challenge of an encounter, but it can be needlessly difficult and complex for something you are adding as a complication. When an encounter already has a key challenge, it can be overwhelming for an additional challenge to require the same degree of focus, effort, and resources. If you’re going for a climactic, epic encounter, that may be exactly what you want. But if you are just adding a complication to increase variety and interest in the encounter, there’s no reason it has to be as challenging as the primary problem—in many ways it’s more interesting if it isn’t. If most of the characters are trying to evacuate children from the burning orphanage, and you only expect one or two to be dealing with the still-present arsonist, making him relatively easy to deal with keeps the encounter’s focus on the lifesaving, rather than a fight. The characters who are poorly equipped to help get kids out, or who can’t resist a chance for a brawl, can focus on just a few of them easily defeating the firebug, while the rest of the characters get the more important plot point of saving children.

But that doesn’t mean the secondary challenge can’t be just as important, even if it’s not just as hard. Obviously, the children in the burning building need to be saved, but stopping the arsonist is important as well. Not only does it keep him from starting more fires (possibly in the building just across the street), so resource efforts don’t have to expand, it’s also a potential opportunity to find out why he started the fire to begin with. Is it fire-for-hire, as a crimelord wants to make a point, or a developer needs the land to finish a new project? Or did one of the children see something the arsonist wants to make sure never gets reported?

No matter what elements of complications you add to spice up encounters, try to make sure you are creating things your players will see as challenges to be overcome, rather than efforts to punish them for having powerful or single-minded characters. Problems with how characters are built or players should be handled with a conversation out-of-character on what is bothering you, and how the players can help you have fun while still making sure they have a good time.

Complications and additional challenges are to make the game surprising and fun for everyone and, like seasoning in good cooking, a few sprinkles now and then often go a long way!