Tag Archive for: print on demand 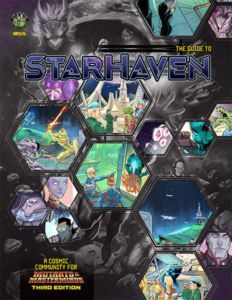 It’s all Alex Thomas’s fault. We said so on Mutants & Masterminds Monday. Alex wanted to run a streaming game for Team M&M and asked “so what else do we know about this Starhaven place mentioned in The Cosmic Handbook?” To which Crystal Fraiser and I said, “Nothing.” The paragraph or so of info about the alien settlement on Jupiter’s moon Europa was just that, a kind of throwaway description intended to inspire Gamemasters.

I guess it worked, because Alex took it upon himself to spin out a whole adventure which he ran on-stream for us. It certainly got Mutants & Masterminds fans wondering, too, and asking “So when do we get to find out more about Starhaven?” If you are a part of the Mutants & Masterminds Patreon you already know the answer to that (and, if you’re not, honestly, you’re missing out). Last summer, we launched a “Summer of Starhaven!” series to design more material about the setting and how to use it in an M&M game.

Now, this summer, we can announce that The Guide to Starhaven is now available for purchase! The 76-page, full-color product goes into detail about the alien settlement of Starhaven, repurposing an ancient, ruined city located on the Jovian moon Europa. Built by the mysterious and powerful Preservers, the domed city has lain abandoned for millennia. Now, a mix of alien refugees fleeing the fall of the Lor Republic and the rise of the Stellar Imperium have been resettled there by Earth’s superheroes.

The Guide to Starhaven looks at the city and all of its various districts, the Green Zone “nature preserve” surrounding it (including all manner of prehistoric Earth animals brought here as specimens) and the unexplored areas of the ruins and what they contain. It also details the inhabitants of Starhaven, their newly established government (voted on by our patrons!), political and social factions, and three main antagonists Starhaven heroes might face.

It goes beyond the bounds of Starhaven to look at survival on the icy surface of Europa and other locations on the frozen moon such as the fascinating Facetwild, with its random energy storms and crystalline creatures. It even dives beneath the surface, into the endless dark ocean under Europa’s ice, and the mysterious life dwelling there, which even the people of Starhaven aren’t aware of … yet.

The Guide also looks at creating your own Starhaven heroes, adventures, and campaigns, including four campaign concepts and nearly a dozen different adventure ideas. All of this, plus a developed, full-length version of “Seige of Starhaven,” Alex’s exciting adventure, where a team of power level 10 heroes take on smugglers, alien cultists, a murder mystery, the dangers of the Facetwild, and an all-out invasion of the city! It’s a great inspiration for a Starhaven series of your own. (As the Untold Stories Project demonstrates with Guardians of Haven.)

The Guide to Starhaven is available now on the Green Ronin Store and DriveThruRPG as a downloadable PDF, and now print-on-demand via DriveThruRPG. For those who will be at Gen Con this August, we hope to have a limited number of print copies there for sale!

If you do decide to reach for the stars and visit the alien frontier of Starhaven, remember to thank Alex. After all, he started it!