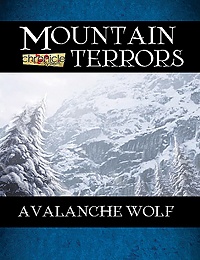 Those who know the mountain heights understand that it is not simply the beasts of the peaks they have to beware of—it is also the dangers of the very land. But even they know better than to cross the path of a hungry pack of avalanche wolves, whose howl can bring the very mountains down atop their prey.

Mountain Terrors: Avalanche Wolf is a bestiary PDF for the Chronicle System, the rules engine that powers our popular A Song of Ice & Fire Roleplaying game. Get it today for just $1.29!