Sword Chronicle has been out for a week, and it’s doing well! Thank you to those who have purchased it through both the Green Ronin Online Store and DriveThruRPG. This is just a quick follow up about our post-release plans.

Check Out the Warfare Wednesday Stream

Last week we tried out a so-called “Warfare Wednesday” live stream to talk about the game, with some side conversations into history, the nomenclature of medieval weapons, and Star Trek. Missed it? Well, you can watch it here (Coming soon to our YouTube Channel as well!). 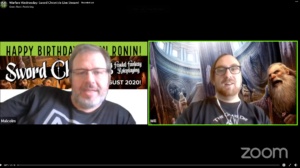 Of POD and Discounts

Several people have asked us whether we’re going to release Sword Chronicle as a print on demand offering from DriveThruRPG, and when. They’ve also asked if we’re going to offer a coupon on the POD version to people who bought the PDF.

Are We Doing POD? Yes. We’re not exactly sure when because we want to polish the file a bit more, and we need to look over proofs (early hard copies) of the POD version before making it available for sale.

Will You Get a Coupon? Yes, if you bought the PDF before the POD came out. After that, a bundle price will be built directly into the entry on DriveThruRPG. Purchasers from both the Green Ronin Online store and DriveThruRPG will get this offer, but only if they have opted to receive email from us. This isn’t a devious marketing funnel ploy, but the simple fact that we need to be able to email you the coupon.  We’re also figuring out exactly what the coupon’s value is going to be, but we want to make it worth your while—we like seeing our stuff in print!

If you want to look further afield, check out our community content, the Chronicle System Guild.

Otherwise, if you have anything you’d like to see, tell us about it through social media and post in GRAAD, our most excellent fan-run Discord, where we’ve been known to pop in our heads from time to time. Also be sure to check out future installments of Warfare Wednesday!

(Not So) Secret Identities
Scroll to top Skip to content