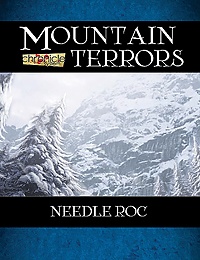 In the mountain heights hunts the needle roc. Much larger than its smaller eagle cousin, the needle roc is a raptor with a particularly distinctive hunting style: it flies past prey and threats alike, popping the viciously hooked quills along its wings to eviscerate those unlucky enough to have earned its ire. Between its large size, viciously hooked talons and twelve-foot quilled wingspan, this beast is a terror to watch out for.

Mountain Terrors: Needle Roc is a bestiary PDF for the Chronicle System, the rules engine that powers our popular A Song of Ice & Fire Roleplaying game.