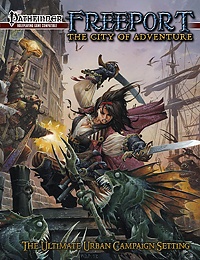 I noted that I was a huge fan of the other publisher’s campaign world, and thought Freeport would make an excellent addition to a chain of pirate islands her campaign had. She liked the idea of adding Freeport, but was concerned it might be too much work. I talked to her about that idea for a bit, but really the fact that anyone thinks adding Freeport to their fantasy campaign might be too difficult means I have failed in my job as a Freeport developer.

The City of Adventure is DESIGNED to be added to other campaign settings. We even open Chapter 14: Beyond Freeport with the line “Freeport is written so the city can be easily dropped into just about any fantasy world. The book keeps the number of assumptions to a minimum, so Game Masters will have an easy time adapting Freeport o their chosen campaign setting.”

Even the World of Freeport-themed pdfs we’re releasing (starting soon!) are intended to be 100% compatible with whatever Pathfinder Roleplaying Game adventures and settings you’re already using. As long as you like the ideas of pirates, ancient inhuman civilizations, eldritch evils, and a big, highly-detailed urban game setting, Freeport: The City of Adventure is for you!

So, let’s talk a little about ways to move Freeport to wherever you need it.

Freeport is an island-based city-state, so it’s easy to drop it into any ocean in any fantasy campaign. If you don’t want to make any changes to Freeport’s background, you can also drop its primary rival (the slaver-port of Mazin) and its primary trade partners (the nations of The Continent) into even more far-off oceans. With this set up, Freeport becomes the midway point between whatever lands your campaign already has, and the nations mentioned in Freeport: The City of Adventure. This allows any references Freeport itself has to foreign lands to be used unchanged, but those lands are so far from your main campaign setting they have no interaction with the existing kingdoms of your world.

There are lots of advantages to this set-up. First, it’s easy. While there are some political plots and npc histories mentioned in Freeport that tie back to Mazin and The Continent, none of them are crucial to using the city itself. By making Freeport a major trade stop between your main campaign setting and Freeport’s own background locations you both get to use anything from Freeport without having to change campaigns. You also get the benefit of a new set of distant foreign lands people only hear about in vague stories and old captain’s logs. Very few campaign worlds are so well defined that there isn’t room for another small continent, far from the action, that a GM can use in the same way the New World or the Far East were used as placed people knew about but rarely went in many legends and fables.

Take What You Want, Leave the Rest

We called Freeport: The City of Adventure “The Ultimate Urban Campaign Setting” for a reason. In this 544 page book there are just 10 pages of campaign history, 15 pages of notes on the world beyond Freeport, and a whopping 303 pages detailing the city itself, its districts, shops, gangs, taverns, and newspaper (including numerous headlines that can be used as plot seeds, rumors, or just background color). There are discussions of favored drinks, narcotics, communication, markets, schools, legends, notable NPCs, and of course businesses – all the things that make a fantasy city feel like more than 12 encounter locations outlined for a single adventure. Even if you don’t want to incorporate all of Freeport into another setting, it has hundreds of pages of material that can easily be plucked and placed into any fantasy city your players are exploring. If a chase scene breaks into a building you haven’t detailed, rather than shrug and tell PCs it’s another tavern you can use entries in Freeport: The City of Adventure for Death’s Spoon, Kellamog’s Bell Shop, the Society of Lobstermen, Santori’s Hat and Haberdashery, or scores of other shops and guilds. If players want to contact the local thieves’ guild and your adventure doesn’t mention one, Mister Wednesday and his Canting Crew will be more than happy to step in. If they suddenly decide to take an ocean trip, the Freeport Docks has details on ships from the infamous pirate vessel Dirty Swan to the humble trading ship Rotten Apple.

Very few fantasy cities have ever been described in the level of detail we provide in Freeport: The City of Adventure. While we think that makes it awesome enough you’ll want to use the whole city, even if you don’t want to add it to an ongoing campaign it can be used as an excellent resource to fill out elements of almost any fantasy settlement you are using.

Another option is to grab Freeport itself, and just swap anything from Freeport mythology and history to match an appropriate option within your existing campaign world. Mazin can be traded out for any city well-known for slaver ships. The Continent is replaced with the main landmass you are already using.

Firearms can become crossbows with ease, or can be restricted to just Freeport and one other nation where they were invented. The serpent folk empire of Valossa is swapped for any ancient fallen inhuman empire, and the ancient god Yig becomes a stand in for any ancient sleeping elder horror of a god.

The details of Freeport itself are new and lovingly crafted, but the bedrock it’s build on are classic ideas with near-equivalents in many fantasy campaigns. If you don’t want to add Mazin and The Continent to your campaign world, just don’t! We focused on the fun stuff within the city of Freeport proper, so it’s easy to drop the city into any setting without worrying about the exact politics, trade rules, and religions of all the other nations around it.

Or you can take all of the Freeport mythology, and use it to combine as many campaign worlds as you want! One of the underlying assumptions of the World of Freeport is that rather than being a section of a round Earth-sized planet with all the normal rules and physics of the Earth, it is instead part of the body of Yig, an elder god. When the universe was created, Yig formed an island to command from the cosmic soup of possibility. Later, he sent coils of power out to draw in other realities to his own, which were in turn conquered by the serpent folk who worshiped him. Though Yig now sleeps, the World of Freeport is still built from his coils, the medium through which different lands are connected.

One advantage of adopting this cosmology is that it allows a GM great flexibility with what finds its way into a campaign. It’s perfectly possibly to set up anything from any books as independent worlds unrelated from one another, but connected by the strange effects of the coils and the power of mystic navigators to allow ships to sail from one campaign world to the next. This may be something easily accomplished by anyone who knows the trick (“second star from the right, and straight on ’til morning!”), or it may require the same sorts of foci and power needed for plane shift and similar magics.

Or, of course, perhaps all sea routes lead to Freeport. Anyone can sail from their home campaign world to Freeport without difficulty, but it’s harder to get from Freeport to anywhere but back to your native reality. This makes Freeport the ultimate melting pot, with its own backstory and related islands, but also filled with travelers from dozens of different realities, all arguing about who has “correct” sea charts and which set of islands and homelands are real and which mythological. As the Port at the Center of Reality, Freeport can become a nexus for adding anything the GM and players find interesting, or even an option for low-level characters to engage in a bit of planar adventuring from the deck of a ship.

There are lots of ways to use Freeport: City of Adventure in any fantasy campaign, and we’re not going to try to tell you which one is right for you. Even this list is just a short selection of the easiest ideas, and we hope it sparks your imagination on ways to use the book to add more fun to your gaming.

Or at least throw your players a curveball.