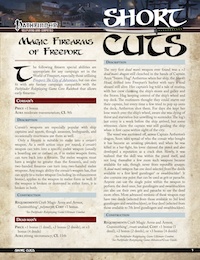 Short Cuts: Magic Firearms of Freeport for the Pathfinder RPG

We are pleased to present the first installment of a new PDF series, Short Cuts. These are tightly-focused PDF products that look at a single topic relevant to the Pathfinder Roleplaying Game. All Short Cuts are appropriate for use with Freeport: The City of Adventure, but can also be easily used in any Pathfinder RPG-compatible campaign setting.

Magic Firearms of Freeport is a six-page, full-color PDF featuring new magical abilities for firearms and powder, by Owen KC Stephens. A corsair’s weapon can transform from its firearm form to a melee weapon. A hairtrigger firearm is infused with magic to help a wielder strike unexpectedly. A firearm or crossbow imbued with the rumlord’s ability contains a hidden–and deadly–surprise. This PDF includes eleven enhancements for firearms, and three types of special powder.

These firearm special abilities are appropriate for any campaign set in the World of Freeport, especially those utilizing Freeport: The City of Adventure, but can also fit with any fantasy campaign compatible with the Pathfinder Roleplaying Game Core Rulebook that allows early firearms.