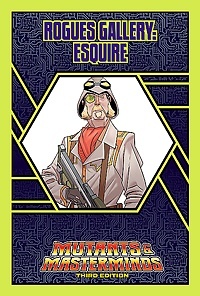 It seems as if we got distracted by Gen Con and forgot to let you know that we released a new Rogues Gallery PDF for Mutants & Masterminds back on August 1. (Thank you to everybody who rolled a critical perception check and found Esquire already—we appreciate your support!)

Esquire is one of the world’s richest men. He was raised to be exceptional and he has embraced his high status wholeheartedly, even going so far as to hunt people for sport on their turf or, more likely, on his private island. His deadly skill with his specially-designed rifle makes him dangerous, but his money and lawyers make him almost impossible to stop.