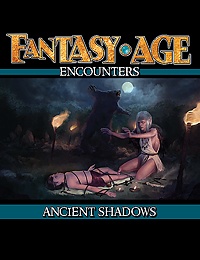 We’ve got a new Fantasy AGE Encounter for you today, for just $2.95!

Ancient Shadows: The village of Crows Crossing lies near a site of ancient ruins and standing stones. Someone has explored where they should not have, and the heroes must decide what to do, lest something terrible be unleashed upon the world.

Ancient Shadows is a Fantasy AGE RPG adventure for heroes of levels 5-8.

Fantasy AGE Encounters are short “side quests” that can be used as is or expanded into longer adventures.

Using the Freeport Bestiary
Scroll to top Skip to content