Modern AGE is a couple of weeks from going to print. In this final stage, we’re refining the look of the game. One of the things we introduced late in the process was a system to color code the three campaign modes (Gritty, Pulpy, and Cinematic) so their rules options are easy to find. Plus, Modern AGE isn’t a one-and-done affair. We’re simultaneously fine-tuning the Modern AGE Quickstart and getting together a Modern AGE GM’s Kit featuring a screen and reference cards.

Oh yeah: There’s one other product in development that’s about 50% through final text development. But I won’t be talking about it until it’s been through a couple of other stages.

Anyway, back to those reference cards. They include a lot of stunts. Modern AGE uses stunts to represent exceptional success, but also for certain special moves which in other games, would involve a special subsystem. This changes how stunts are framed compared to other Adventure Game Engine RPGs like Fantasy AGE or Blue Rose.

One new major action in Modern AGE is the Stunt Attack. In combat, you forego the standard result of an attack—inflicting damage—to automatically gain 1 stunt point. You still get stunt points from doubles. These and other sources of stunt points (usually Relationships) stack with your free SP. This is how you perform actions which in other games, would be resolved with a “grapple check” or something. In many cases it’s better to inflict damage, but when you gain talents and specializations which enhance your stunts (such as Modern AGE’s Martial Artist, who gains bonus stunt points for some stunt attacks) it can become a powerful option.

Due to the expanded role of stunts, Modern AGE includes a whole bunch of them, bundled into specific categories, such as Grappling Stunts and Membership and Reputation Stunts (which support that game’s more robust social system. Two new “non-rules” enters the game to deal with the risk of decision paralysis. Every stunt list has labeled Core Stunts. These have low or variable costs, and are generally useful, so when you can’t decide on your stunts, these are your picks. Related to this non-rule is the next: is the book’s explicit advice to pick stunts you like and want to use ahead of time. Make your own menu and see how it plays out.

These are “non-rules” because they’re just ways to help you pick stunts. They never limit your selections. You can still pick any appropriate stunt you can afford! Eventually, you’ll find your favorites and use them to define your character’s personal style, but you can always switch them up. It’s a lens, not a locker.

As you might have predicted after seeing a similar system in the Fantasy AGE Companion, Modern AGE gives you the option to run vehicular combat without tracking a Health Point equivalent for cars and such. While the GM can assign Health values to vehicle parts and special effects for destroying them, affecting the vehicle as a whole involves Anti-Vehicle Stunts whose effects range from making the target vehicle harder to handle, to turning it into a twisted, flaming wreck. Some attacks, such as those with an anti-materiel rifle, can generate more powerful stunts against vehicles.

Chase Stunts are another new stunt group affecting vehicles, though they can also influence mounted or foot chases. These interact with Modern AGE’s chase rules. Again, if you’ve seen the Fantasy AGE Companion you’ve seen a version of these rules, though they’re not exactly the same as their modern counterparts.

This isn’t everything you can do with stunts. In fact, I’m going to plug the Fantasy AGE Companion again and recommend its rules for stunt pools and stunt packages, which could easily be used with Modern AGE. Furthermore, we’re working on a few new options for stunts in that book I can’t talk about yet!

My evasive behavior will change soon—I promise! This is the first Modern Monday column, and as we ramp up to launching the game, and getting it to you in its “early bird” PDF medium, you’ll see more about Modern AGE, its principles, and our plans for the line. These include the World of Lazarus campaign setting, based on Greg Rucka’s comic of the feudal near future. See you next week! 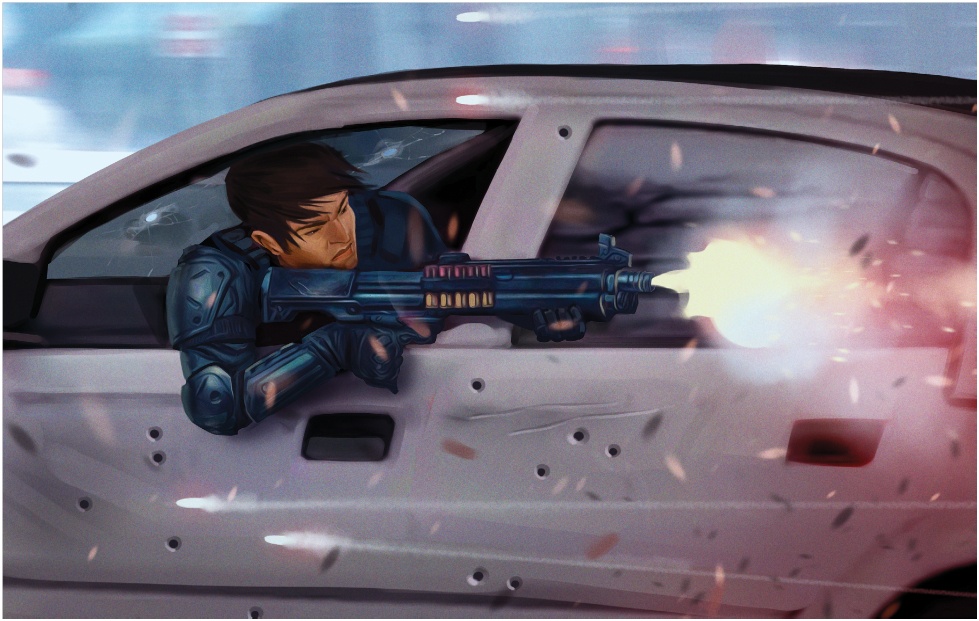 Why call shotgun unless you really mean it? In case you’re wondering, Brian’s on the left side because this is Sean’s fancy British car.

Modern Mondays: Get Your Fight On
Scroll to top