Hey folks, Jack here. As we are getting ready to release the Fantasy AGE Campaign Builder’s Guide literally any day now, I thought I’d take a moment to answer three of the more common questions I’ve gotten leading up to the release. Hopefully this sheds a bit of light on the book’s content. 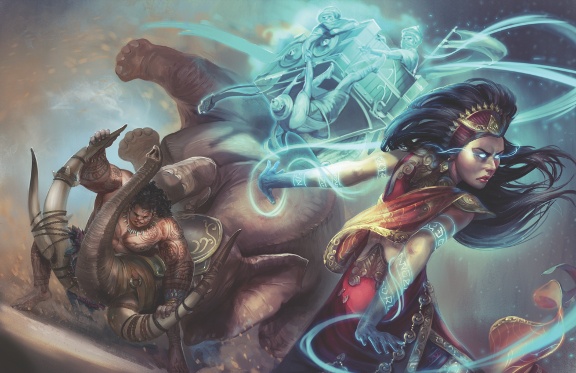 Q: You said the book has a chapter on epic play, you mean high level play?

A: Well yes and no. I mean epic play. Big sweeping threats, plots, and other elements. Deadly artifacts and beings with godlike powers. Dogs and cats, living together. You know, mass hysteria.

That often is high level stuff. When heroes hit the upper levels of the game, they start to run into more dragons, demon lords, and similar nasty threats. These threats tend towards big ambitions and can often affect things on a national if not global scale. But on the other hand? One of the most famous stories in fantasy is about a short little gentleman farmer and his gardener taking a magic artifact to the most dangerous place in the world so they can destroy it and in doing so basically kill an evil god. Epic as all hell, but the heroes weren’t necessarily Level 20 badasses.  So the book will talk about both high level and just generally epic play, including how to make campaigns where heroes are godlings and divinely powered superhumans from Level 1 if desired—mechanically its simpler than many think.

Q: What kind of Alternate Rules Does the Book Have?

A: There are several optional and alternate rules for GMs wishing to give their campaign a certain flavor or feel. These generally combine very well with similar rules in the Fantasy AGE Companion. For example, in a dark fantasy game a GM might take the new Grave Wounds optional rule and combine it with rules from the Fantasy Age Companion for increased lethality for a very dangerous and gritty campaign. On the other hand, another GM might use action points and other similar rules from the Companion and add in the Cinematic Acrobatics rules for a Wu Xia-style fantasy campaign. And so on.

Some of these rules are brand new. Some others are adapted from other AGE system games, though usually with noteworthy changes. Which brings us to…

Q: Wait, Haven’t I seen this Stuff Before?

Maybe. While the majority of the book is new content, in a few cases rules from Dragon Age, Blue Rose, and Modern AGE were adapted for a particular element of campaign building. This was done so that customers didn’t need to buy books outside the Fantasy AGE line to get an appropriate rule. In most cases these rules were altered or adapted, such as with the Investigation Stunts included in the book—these are similar but not identical to those found in Modern AGE.

Also, in a couple rare instances an older rule or concept from Fantasy AGE itself was revisited to preserve the step by step flow of the book’s chapters on campaign building. The prime example of this is the inclusion of a summary of the Companion/Follower rules, as well as briefly revisiting Honorifics, Memberships, and Titles in the chapter on building campaign rewards.

These concepts are revisited because the discussion in the Campaign Builders Guide is about how the GM can design, use, and incorporate these elements as rewards as part of a larger campaign building strategy. As an important part of campaign development? We came back to them for a brief section to avoid the distraction their absence would cause—especially in readers who haven’t yet picked up the Fantasy AGE Companion.

I hope that clears up a few common inquiries and shows how the Fantasy AGE Campaign Builders Guide combines campaign building advice, new content, and the occasional revisiting of established AGE elements to help GMs form and shape their own settings and campaigns.

Trust in the Scarab: Threefold’s Sodality, Part 1
Scroll to top Skip to content