Hey Fantasy AGE fans, Jack again. Some time ago we introduced you to Aza, our iconic warrior as featured on various images and in our warrior entry in the Fantasy AGE Core Rulebook. This 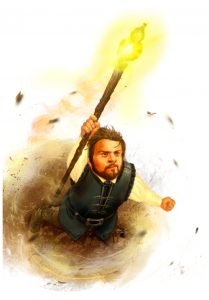 time we’re turning to the mystical side of things and taking a look at Wim, our mage.

Pale-skinned, well-dressed, and bearded, Wim Iakabal fits many people’s idea of a wealthy dwarven merchant or scholar. The scion from a family of famed academics, Wim studied classic architecture and engineering at several esteemed universities until his natural aptitude for the mystic arts was discovered. Enrolling in the elite King’s College of Magicians (see Fantasy AGE Bestiary, p. 50), he excelled in his studies.

Unlike his many cousins and siblings, Wim was ultimately not content to merely study in the safety of the library or laboratory. In his fortieth year of study, he left the university seeking more dynamic and exciting opportunities. As an expert in ancient structures, complex machinery, and magic he found his particular eclectic skillset was in high demand on various expeditions to explore lost tombs, ruined cities, and ancient temples.  Nearly dying on an early expedition to a trapped temple rumored to hold vast treasures, he was rescued by and fell in with his current companions and has been traveling with them ever since.

Wim tends to spend a lot of time thinking, theorizing, and planning. In fact, his companions often tell him he thinks “too much”, especially since it is their skills in battle that must save him when his magical talents fail to protect him from his own curiosity and tendency to distraction.  However, his knowledge often comes in handy in a variety of situations, as does his quick wit. Wim is surprisingly hardy for a scholar, a fact owed to a realization of the importance of physical fitness and his dwarven constitution.  He isn’t much in a stand-up fight, but can use his magic to great effect in battle.  He is rarely without his magical Staff of Channeling, a souvenir from an early adventure.  He’s been considering taking up explosives, but so far his companions have convinced him that’s probably more trouble than its worth…

Equipment: Staff of Channeling (Take a minor Activate Action to reduce the MP cost of the next spell you cast by 2 and grant a -1 SP to any spell stunts), spyglass, compass, books and notes on various theories and discoveries.

You Am Ork! Again!
Scroll to top Skip to content