Threefold is in stores now, though you can of course get it from us, too. I’ve used a lot of words to, frankly, sell you on this setting, for my selfish advantage and because I think you’ll really like it. I like to think it has a thematic core that comparable wide-open settings lack. Threefold is about the power of souls—sapient thought—to steer history, in spite of various catastrophes and other mighty forces that stand in the way. We are more powerful than we think. 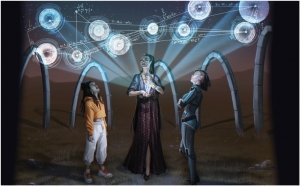 Where you go next is entirely up to you. We’ve just given you a map.

As you can tell, I’m invested in this setting. What does that mean for Modern AGE? Is it all Threefold, all the time now? No—and yes! It’s a complicated answer based on how I plan to structure Modern AGE releases.

Threefold is our “flagship” setting, where we’ll provide multi-book support. That starts with Five and Infinity, an adventure book coming in 2020 that is currently awaiting final drafts. Further support will follow, including books providing deeper detail into the setting’s main factions.

Our very next Modern AGE book, Enemies & Allies, isn’t strongly tied to any particular setting. It’s a book of Non-Player Characters and creatures divided into modern fantasy, horror, modern thriller, crime, and near future science fiction categories. However, it is designed to be completely compatible with Threefold, and one of that setting’s elements, the hidden nation of Invindara, was originally devised for Enemies & Allies by author (and now, Fifth Season Roleplaying Game developer) Tanya DePass, and appears in both books. You can enjoy Enemies & Allies without needing Threefold at all. It’s currently in layout.

Future Modern AGE books that aren’t tied to any setting may or may not have a special connection to Threefold. The Modern AGE Mastery Guide, due next year (and currently going through first drafts) won’t. In any event, we remain committed to offering you tools to build and customize your own settings. This is what books like the Mastery Guide and the already-released Modern AGE Companion are all about.

Furthermore, we’ll be doing more settings ourselves. Ideally, I’d like to have three additional original settings besides Threefold. These will not get Threefold’s “flagship” support (well, unless one really takes off!), but will provide comprehensive treatment in a single book. And we are definitely not averse to doing more licensed projects like The World of Lazarus. Modern AGE will never be tied down to a specific setting, and while Threefold provides a focus to the game, it will never be the only universe we explore.

As you can see, Modern AGE’s support plans are expansive, and follow a more aggressive schedule than you may have anticipated. But like all statements about the future, sales, the state of the industry, and what I’m doing can all change how it’s going to go. But this is the way it looks right now, and I feel pretty good about it. There’s more coming for Threefold but there’s more coming beyond it, too. And next time I step up to talk about a book, it’s probably going to be Enemies & Allies. Until then, play well, and talk about what you’re doing with Modern AGE on all the platforms you like. In our setting or yours, I love to see you play. Cheers!

Ronin Round Table: Sovereigns of the Blue Rose Introduction
Scroll to top