Threefold, which premiered at Gen Con and hits stores September 3, is a new setting for Modern AGE, allowing characters to explore numerous worlds connected to science, magic, and psychic forces.  It’s very, very big—one universe isn’t enough to contain it! Reviewer Jeremiah McCoy says it feels like a TV show with ten seasons of lore. This is intentional. I didn’t develop this to be a diversion, but a setting even an experienced gaming group could hang the majority of their play on for years. Talking about it, I called it a return to “Big Setting,” like those from 25 years ago and more which offer deep immersion and a variety of stories.

But this begs the question: Where do you begin? Fortunately, Threefold itself provides answers in its text. I want people to play it, after all. Unlike many of the great settings of yesteryear, it isn’t designed to just sit on a shelf. 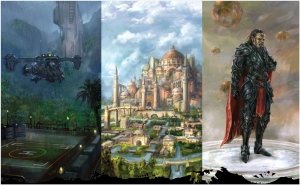 Root Factions: The Sodality and Aethon

Chapter 4 of Threefold presents our default focus, split into characters from the Sodality, a transplanar agency devoted to exploring the Metacosm and defending its diverse peoples; and Aethon, who protect Earth’s prime timeline (primeline), meddle in the affairs of alternate worlds, and often accompany Sodality characters.

The Sodality received slightly greater support for play, as it’s integrated into the Vitane’s government of many planes, and characters’ service branches—Emissary, Protector, and Searcher, suggest the social, action, and exploration aspects that define Modern AGE itself. Characters follow the Vows of the organization, and supervisors called Magisters supply them with orders and goals. This makes a Sodality focused game the easiest one when you want to explore the broad setting.

Aethon suits a more conservative approach to the setting. Aethon characters have supervision and objectives to keep them focused, but primarily operate in Earth’s primeline or, using devices called quantum arks, in alternate worlds. They protect Earth from the dangers of alien planes, as well as homegrown sorcerers, psychics, renegade scientists, and miscellaneous strangeness. Aethon is the way to go when you want to gradually reveal the setting. Characters can eventually visit other planes working alongside Sodality members, or on clandestine missions such allies might not approve of.

While these factions are the easiest to start with, nothing in Threefold demands you stick to them. If you want to play Krypteia gangsters or Nighthost warriors, go for it! The Sodality and Aethon are the most approachable options, but not the only ones.

Another way to narrow your focus is to look at different slices of the Metacosm, and decide what sort of worlds you want characters to visit. Threefold is designed to give each of the three major types of planes a default genre. Otherworlds suit classic fantasy adventure, where magic saturates the land. Netherworlds are keyed to dark fantasy and horror. Earth and its parallels lead to stories about the Singularity, transhumanism, and even time travel. Limiting your initial explorations to one of these types of planes can help focus the game. It’s also perfectly possible to run entire adventures, and even campaigns, without stepping through a single gate. This is best supported on Earth, where psychic guilds, rogue scientists, warlocks, and AI-directed criminals provide numerous challenges, but surviving a single Netherworld, or exploring one Otherworld, can occupy players for some time.

Beyond the core factions and planes, Threefold bases its default play style on “speculative fantasy”—that is, fantasy stories using the story patterns of classic science fiction. Next time around, we’ll talk about that. Until then, remember that while any story is possible, your story, and the focus you give the setting, is paramount, and will define your version of Threefold.

Height of the Storm, A New Mutants & Masterminds Novel
Scroll to top Skip to content