One of the neat things about being developer at large at Green Ronin is that I get a taste of nearly everything. And lo, I have sampled many hyper-palatable game treats, full of the salt, sweetness and fat of . . . okay. Metaphor’s been stretched too far. Besides, maybe that doesn’t fit with the taste of Ork!

Ork! The Roleplaying Game was Green Ronin’s first original RPG: an unabashed “beer and pretzels” roleplaying game of comic carnage by Todd Miller and Chris Pramas, with Robert Toth. Green Ronin’s been working on a new edition for a while, but they—now we, since I’ve joined the firm—want to get it just right. Ork! comes from the company’s cradle. The kid’s grown up and headbutted people at a few hardcore shows, but we still love him. He was never good in school, so we’re giving him a job at the company, and an upgrade, into Ork! The Roleplaying Game, 2nd Edition.

Getting Ork! right means getting the tone (funny and relaxed) and game play (action-oriented but not tactical) down the way the game needs, and the way Chris and Todd want to see it. Thus, as the game’s developer I’ve stood on the shoulders of giants, or at least trolls: Chris and Todd, Robert, and Jon Leitheusser, who started the process of getting Ork! to its next edition.

You Am Get Core Premise
Since I became Ork! developer, it’s been my job to review everything to date, and polish it to fit Chris and Todd’s vision for the game. When confronted with the manuscript, I decided to think like an ork, and ask dumb questions, like: “What am game about?” (This is how orks speak, by the way.) This is a dangerous question in game design, because if you develop the game to stick too closely to the answer, you get something narrow and boring. But Ork! is a comedy game, and these aren’t usually in danger of getting too anchored—in fact, they tend to need that premise more than your average straight-faced game. Players already tend to act silly, so for comedy, the question really asks, “What absurd thing gets taken seriously, so comedy happens without forcing it?” So, I read Ork! and found the key: god barf. 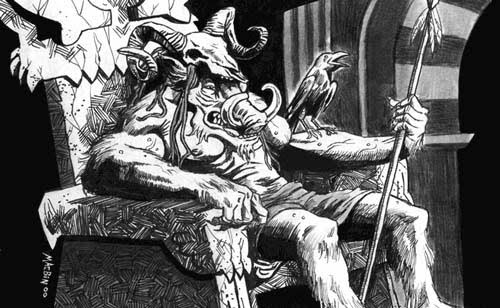 In the beginning, there was no earth, no sky, no sea. There was Krom.

And then, he woke up. And he was hungry. So, Krom searched around for something to eat.

At last, he found a rock. Krom ate the rock, and it was good.

Out of Krom’s stomach came the world, all the mountains and oceans and animals.

But Krom still felt sick. He never should have eaten that stupid rock!

And he was mad.

And they were good.

Krom spoke to them.

“You shall be brave and strong,” he told them.

“You am shut up!” they yelled back.

And so, Krom cursed the orks.

“Everything that walks, swims, or crawls on the earth shall be your enemy. And they will never rest until they destroy you!”

“But, if you should somehow kill them all first, then I shall reward you.”

So spoke the mighty Krom.

And the orks were happy.

That’s what Ork! is about. You’re an ork and somewhere, up there, Krom presides over his barf. He’s annoyed.

You Am Get Game Meka, uh Miccani—You Am Get New Rules!
Ork! reinforces is mythology with its core mechanic: All dice rolls are opposed! Sometimes they’re opposed by the rolls of other orks, squishy men, sour men and the hordes of other annoying beings that inhabit the world, but when anything else opposes an ork, such as a tricky thing to climb, or how to make a weird magic item work? There’s not static, objective difficulty. There’s Krom. You roll against his dice. Now he’s a god, and this might seem unfair, but Krom rolls dice based on how interested or annoyed he happens to be with his least-favored creations. Chris Pramas baked this idea right into the rules, and I’ve decided to use it for a couple of new systems, including the following:

Cheats: Other games have “specializations,” and “focuses” that represent special training or talent. But orks aren’t the sort of people who stay inside and practice violin while the other orks play kick the squishy man head, and they’re not really “gifted”—or at least, orks don’t get tutors and special classes and pats on the back. To be especially good at something, they must cheat Krom.

Cheating Krom gives an ork the ability to steal dice from the Orkmaster—that is, the GM who represents Krom in an Ork! session. You roll them alongside your own to do especially well at something. The downside? Krom can’t be cheated forever, and those same dice get added to some future roll against you. Todd Miller’s called the new edition a game of “passing the dice around,” and that’s intentional, as swiping dice back and forth, to defy and be punished by Krom, is part of play.

Magic: Ork! features a lot of magic. Most of it takes the forms of items orks either find during adventures, or are given by their leader, the Warlock (changed from “shaman” in the last edition). To activate them, players roll against the item’s Krom dice. Magic is, after all, a form of cheating, and Krom prefers orks use their toothy snouts and meaty hands to get things done. In addition, this edition features ways for orks to use magic themselves. Todd’s experimented with this idea, and wanted a system that could deal with it without leading to “magic-user” types annotating their character sheets with boring stuff. Thus, all magic deal’s with Krom’s Curse—and if you’re trying to twiddle your thumbs and magick up some missiles, well, Krom doesn’t like that one bit. But the world is weird, and Krom wants orks to show a little backbone (their own, or one ripped out of an enemy vertebrate), so this punishment is about flavor, not giving the players a bad time.

You Am Play!
I’ve grown pretty attached to Ork! and have really enjoyed collaborating with Chris and Todd, and seeing the great work people have put into the game. Now that it’s my turn, I’m taking their advice and looking at it with an eye toward how I’d like it to run. That means breezy, brief rules, plenty of room for improvisation, and a system that leashes a couple of fun ideas to a system designed to unleash a little orkish mayhem. Hope you like it! Or, uh, you am like it!