We’re known for many, many different games, from Mutants and Masterminds to Adventure Game Engine system releases like Fantasy AGE, Blue Rose, and Modern AGE, but the oldest game in the lot got submerged beneath it all—until now. I’m talking about Ork! The Roleplaying Game, which ships a new edition into retail channels this month! As last-leg developer of the game I’ve blogged about it from time to time. It’s taken 18 years to get around to releasing a new edition, so this month we’re going to celebrate by talking your Krom-damned ears off (in text, so also, eyes off) about it! This week, we’ll be getting you up to speed by answering some Frequent Ork Questions. Read on as we give a FOrkQ about informing you! 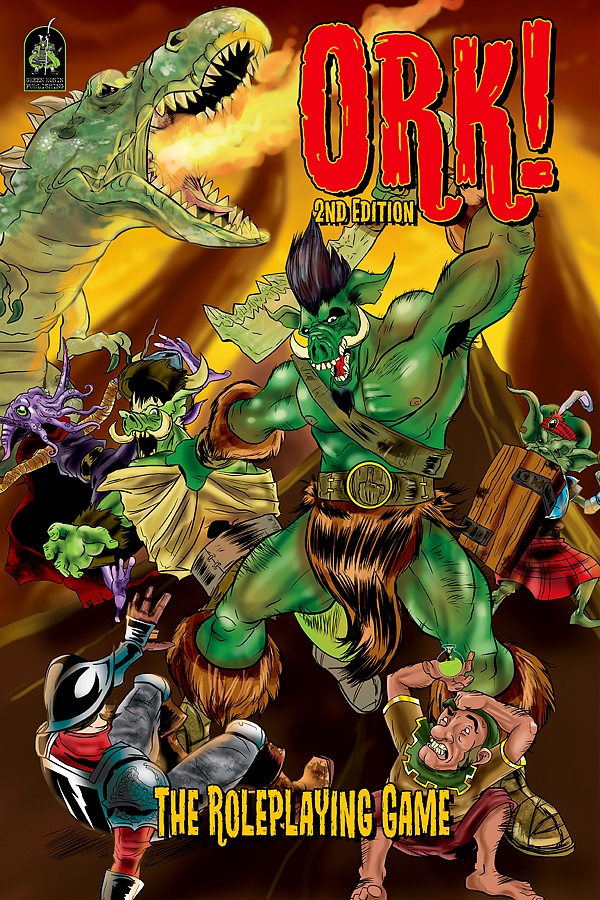 It’s a “beer and pretzels” comedy-focused game where you play orks: the pig-biting mad, green-skinned, snaggle-toothed warriors who take the fall in many, many other games. Ork! has a relaxed, easy system that emulates orks’ struggles in a world where everything is against them: humans (or “sour men”), fire-breathing dinosaurs (of which there are many) and, well, God Himself, or precisely: Krom, cruel deity of the orks!

Dice pools, man. This game was designed at the tail end of the 90s. Seriously though, in Ork! you roll some dice and add them up against an opposed roll, because in this game, the world isn’t a set of objective challenges. It’s not even a “narrativist” setup where we like it when you try to beat people up for love. In Ork! you get opposed rolls because Krom, in the form of the Orkmaster, hates you! He’s rolling dice against orks who are trying to succeed. Your prospects depend on whether you entertain or annoy him! It’s unfair. It’s Ork!

Sometimes you can cheat Krom, though. Your obsessions and obstinacy let you steal dice from Krom and add them to your own, but he always gets wise to this eventually, and you end up trading success for his wrath later! Fortunately, orks are short-sighted, and don’t suffer from a rising dread of cosmic payback.

Oh yeah: The game has a combat system that lets you hack off limbs, because that is obviously essential.

What are Orks in This Game, Exactly?

Orks are big, green, rough, and boar-snouted. Orks like to fight, eat and drink. Orks live in villages with nameless young gunks, warriors who’ve earned a name, and the warlock, a leader who manages to use magic without exploding. (Krom hates magic.) Orks aren’t necessarily stupid, but do tend to, uh, excessively live in the moment. Orks don’t work for dark lords unless they’ve been conned. (Note: orks are easily conned.) Only the wisest of orks know strange, mystical secrets, like the fact that seasons pass and there’s not just arbitrary stupid weather.

What Do They Want?

Where Do They Live?

You want a setting? Orks barely know anything about the world around them, so if there was a mighty prophecy with a ring or soul-stealing sword or something, they wouldn’t notice! But we’ve still got you covered, with the World of Orkness. What’s in it? Magic. Sour men. Lots of types of shameless parodies of fantasy mainstays, like those cute folks who don’t wear shoes. Note, however, one point of originality: Dwarves don’t sound Scottish—goblins do! I swear, if we tossed Cthulhu and some panoramic art in there, the world alone would be an Ennies shoe-in.

What you need to know is there was a magical catastrophe which opened gates to many other worlds. Therefore, orks run into giant robots, airships, dinosaurs (which, as noted, breathe fire, which may be original paleontological research on our part), spray cans of cheese, and road signs from Lake Geneva, WI.

What’s in This Game I Am Increasingly Convinced I Should Purchase?