Let’s talk about the most important system in all roleplaying games: Combat! Okay, maybe not all roleplaying games. Maybe you play games where it’s all Angsty Debate Team or you roll for self-actualization. Ork! The Roleplaying Game (Like goes to pre-order: KROM DEMANDS PRE-ORDER) brings you back to your senses, filling them with a red haze and the ripping meat sounds of glorious battle.

Combat in Ork! is simple but atmospheric. Because it’s easy and game designers are lazy, fighting is an extension of the core rules, which I covered last week. Ork! uses opposed rolls for everything. Your ork’s basic attribute (like Meat, measuring general physical ability) gets a die type—the bigger the die the better—and your skill rating determines how many dice you roll. If the challenge is environmental, you roll against Krom, the merciless ork god who vomited up the world. If the challenge is another creature, you roll against it.

Thus, combat is a series of opposed rolls against whoever you want to wallop. You do as much damage as the points by which your roll exceeded your target’s. Add bonus damage for a weapon. The enemy’s armor reduces damage. One roll and it’s all done! 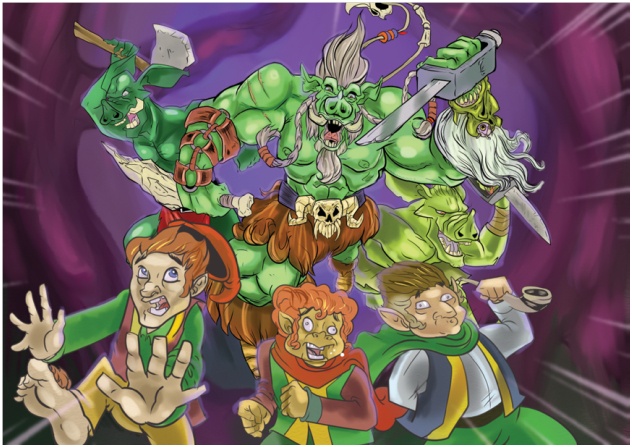 Things You Am Do in Combat

Movement: Ork! uses rough distances, ranging from Right Here (you can hit someone because they’re Right Here) to Over There (you have to hustle over, then hit them) to Far Away (it takes a round to get to them), Too Far (it would take more time) and Way Too Far (throw something instead!). These have real feet-based measurements, but the point is that the Orkmaster can use natural language instead of getting out a ruler.

Ranged Combat: Roll Aim (used for missile weapons and winning bets about who can hit a roosting pterosaur with a thrown pine cone) against the opponent’s Duck (the skill of being sneaky and getting out of the way). If the opponent is past the weapon’s short range, has a shield, or is hard to see, they get bonus die to their Duck roll. Easy!

Other Stuff: Combat includes rules for Attacks of Orkitunity (hitting cowards who try to get away!), sneak attacking and riding dinosaurs into battle. It has rules for Crunchies—pathetic enemies with just 1 Wound to make you feel mighty—and mobs, which is what happens when Crunchies gang up.

“Critical hits” sounds too technical for a game where your character dreams of killing the stupid sun. Ork! has big hits instead. You score a big hit when you don’t need all your dice to succeed. If you rolled a 7, 8, and 3 on 3d10 against your opponent total of 14, the 7+8 you rolled, making 15, is enough. You didn’t need the 3—and you can use that to pick a big hit. The Orkmaster can make big hits up, but the game as a decent list.

Example Big Hit—Dis’Arm: Orks have heard the term “disarm” and assume it refers to their favored tactic of depriving an enemy of the use of a limb: twisting until it snaps, crackles, and pops; hitting it with a blade, bludgeon, or thrown rock; or biting it really hard. Your enemy can’t use of the limb until they succeed at an Endure roll versus 3d6 Krom dice. Roll this once per round immediately after the victim’s turn until they succeed. It doesn’t use up the victim’s action.

If the Dis’Arm happens as part of an attack that drops the enemy to 0 Wounds, the Orkmaster may allow you to chop or rip the target limb clean off! Now you have a gross club.

(Yes, there are rules for reattaching severed limbs. Got a nail gun?)

Characters in Ork! have a Wounds score, which works like the classic get-hit-lose-points-yeah-basically-hit-points system you know from other games. Unlike other games though, Wounds represent a general resistance to being physically defeated. This is a cheap trick that gets us out of designing stupid rules for “grappling,” “overbearing,” and so forth. How you beat up the enemy is entirely descriptive, and these descriptions are frequently vague, and full of yelling. What matters is how you intend to crush your enemy!

Therefore, dropping to 0 Wounds brings about the option of death, but it can also be used to indicate capture, maiming or just getting knocked out. As a side effect, the Orkmaster can refrain from killing orks outright until it would be really, really funny. This often happens sooner than you think, so beware anyway!

Me Am Not Die. Me Am Cheat!

Cheating Krom is a special system orks have to stave off doom in exchange for bigger doom. It and ork points are the high-falutin’ tone-reinforcin’ meta-systems of the game, and we’ll talk about them next week. Aaaargh!