One of the core features of Earth Prime is that it’s a dynamic setting. Just like your favorite comic books, the world constantly changes as new crises challenge heroes and villains alike, and the steady march of time means new heroes enter the picture as older heroes retire. In the Emerald City Knights adventure arc, we introduced a status quo on the west coast then tore it apart in the space of six months. In Hero High, we introduced the newest iteration of Next Gen (the first team having long since graduated to bigger and better things). In the Cosmic Handbook, we destroyed entire planets, destroyed an empire, and cranked up the danger as the Star-Khan conquers much of the Lor Republic and Blackstar forms his Blackguard to oppose the Star Knights.

The upcoming Freedom City introduces many changes of its own that have gripped the city since its last depiction over a decade ago. Popular Mayor Michael O’Conner has long since moved on, now representing the entire state as Senator O’Connel, with a dedicated familiar face taking his place. Crimelord August Roman is out of the picture, replaced entirely by his endlessly opportunistic daughter. Perhaps some of the most exciting changes are in the Freedom League’s roster. Several long-term members—including Captain Thunder and the Raven—have retired to make way for a new generation. Let’s take a sneak-peak at two of the newest members:

Thunderbolt is Ray Gardener, Jr, formerly of the teenage superteam Next-Gen. Hoping to follow in his father’s footsteps, he used the electrical powers he inherited to fight crime as the young hero Bolt. A little too eager to prove himself worthy of his father’s legacy and earn a place in the Freedom League, he fell right into the clutches of the fiendish Dr. Stratos, who used the young man as bait to lure Captain Thunder to his doom. The adventure that followed left Captain Thunder drained of his power and Ray Jr. infused with more elemental energy than his young body could handle. Now trapped inside a containment suit to stop his form from dissipating, Ray Jr tries to fill his father’s role on the Freedom League, but instead of youthful zeal he now finds his purpose in service, accepting the burden he struggled so hard to gain in his younger years. 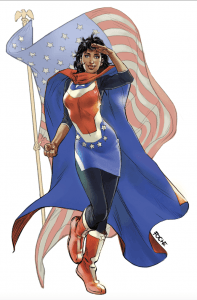 Lady Liberty, by contrast, is one of the city’s newest heroes, and is still enthusiastically learning the lifestyle and the scope of her powers. Medical student Sonja Gutierrez sacrificed herself to save a stranger and found herself empowered by the Spirit of Liberty. Now inducted as a provisional member of the Freedom league thanks to her legacy status and tutelage under the previous Lady Liberty, Beth Walton-Wright, Sonja still struggles to balance her superheroics with her education and work. Unlike previous Lady Liberty’s, Sonja’s love for her native country is nuanced—she admires the spirit and potential of the United States against the terrible ways it treats immigrants like her parents and trans women like herself. Her frustrations are only amplified by a small by vocal group of conspiracy theorists who insist she somehow stole the mantle of Lady Liberty—including her nemesis, the murderous Madame Guillotine.