As promised we’ve unveiled the add-ons for Sentinels of Earth-Prime today! The info is on the Kickstarter page but I’ll repeat it here for the sake of convenience.

We’ve got four additional decks for Sentinels of Earth-Prime: two heroes, one villain, and one environment. You can get them by simply increasing your pledge. They are $6 per deck or you can get all four decks for only $20! So if you wanted two decks, you’d increase your pledge by $12. If you want want all four, increase it by $20. You’ll be able to pick the decks you want after the campaign via BackerKit. 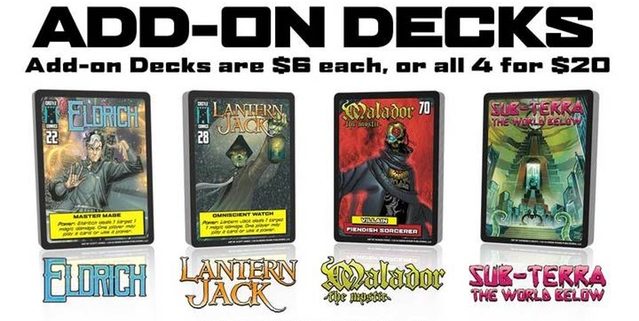 Let’s take a look at each of the add-on decks!

Eldrich is the Master Mage of Freedom City. An adventuring archaeologist of the 1930s, he is the reincarnation of the Atlantean mage who imprisoned Malador the Mystic millennia ago. He defends Earth-Prime from mystical threats and is an ally of the Freedom League.

The mysterious guardian of Lantern Hill dates back to the Revolutionary War in Freedom City. Stories claim that Lantern Jack is the restless spirit of a colonial patriot slain by a British officer when he attempted to warn the people of the city of an attack. The truth is much darker…

Malador is an ancient sorcerer from the sunken realm of Atlantis. Once a noble protector of humanity and a scholar of mystical lore, Malador has become mad with power-lust. He wants nothing more than to wield ultimate power and be acknowledged as the supreme master of the mystic arts!

Sub-Terra is the strange realm deep beneath the surface of Earth-Prime, where the Serpent People and Morlocks engaged in a long and brutal war. It is a place of monsters, myth, and menaces spawned from both science and sorcery.

These decks have a decidedly mystical spin and will add a lot to the core game. Consider adding them to your pledge today!