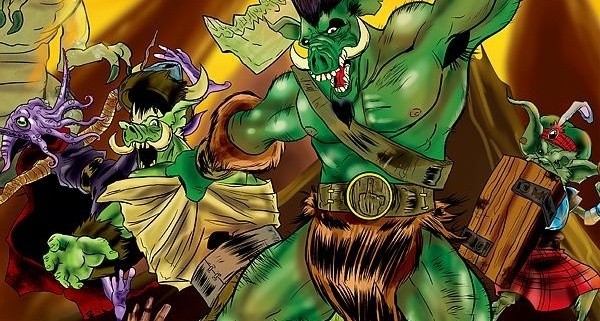 Me am understand you am following hype and word of mouth. Mouths am stupid, except for eating! And insults! Me am hear of game called “The Expanse.” It am based on “book:” little marks on sliced up trees! Trees am stupid. If trees am sliced up, it means they am also weak! Could not fight back! Besides, warlock am saying reading make head explode! Reading and broccoli do this? Me am hear about games using “AGE system.” AGE? What am AGE? Like time? Time am illusion, or at least waste of…something…to keep track of!

You probably am saying to self (in stupid sour man words): “What is this strapping green tusked person getting at behind their unusual diction? Are they suggesting Green Ronin makes other games besides Mutants and Masterminds, and AGE games like Fantasy AGE, Modern AGE, Blue Rose, and The Expanse?” If me am physically present, you am also saying, “OH GOD WHY IS HE HITTING ME WITH A MOOSE JAWBONE?”

The answer to both questions am Ork! The Roleplaying Game, now am in second edition! Me am now answer FOQs (Frequent Ork Questions) in stupid sour man (or “human”) way of speaking: 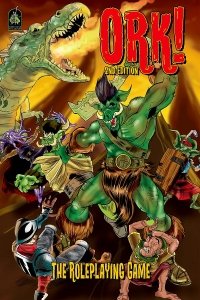 Ork! Is a beer and pretzels RPG of orcish mayhem! Players portray orks without the pretense of a rich culture or anything like that. Orks in the game are violent, short-sighted and hungry, but still interesting. Playing an ork is a battle from the moment your character steps out of the gunk pit (that’s where the lowly nameless young orks live) to a confrontation with the village warlock, who’s simultaneously your character’s leader and biggest enemy.

Light! Fun! It takes about 15 minutes to make a character. The rules for combat (and other, lesser systems) follow one rule: All dice rolls are opposed! This is because in Ork! You’re always fighting someone. If it isn’t an enemy in battle, it’s Krom, god of the orks! Krom’s the one you’re dicing against to climb a cliff, cast a spell or stop putting your finger in there.

That’s right. Orks can try to cast spells via a freeform magic system—but Krom hates it! Orks face a never-ending struggle against their god, who vomited them up at the beginning of time. Krom controls the world, but sometimes you can cheat him, making a challenge easier, but eventually, Krom catches up with you, and then it gets bad. With this system, the game supports an orky way of thinking: Get glory now and worry about the consequences later! Sometime Krom is grudgingly impressed too and rewards you with ork points which you can use to pull off truly epic feats. Combined, this means the best strategy is to please mighty Krom, then screw him!

What’s in the book?

Everything you need! Making characters. Rules for fighting, including big hits with special effects. Rules for being on fire, and getting attacked by bees, and getting attacked by bees while on fire. An enormous roster of foes, from sour men (humans) to dinosaurs—and the dinosaurs always breathe fire. Finally, Ork! Includes a series of adventures fit to take characters from pathetic halfling-muggers (orks call halflings “squishy men,” by the way) to mighty tusked warlords. Plus, there’s full color art from Dan Houser (artist for Icons, too!) and jokes about Leon Trotsky and Werner Herzog flicks.

That am enough sour man style talk! You am buying Ork! (Or PDF! Or on DriveThru!) It am on sale! This am what marking call, a call to action! You am fall down sales funnel for glory of Krom!