This past couple of Orktoberfest weeks we’ve talked about the basics of Ork! The Roleplaying Game, Second Edition (Pre-Order Link!), starting with Frequent Ork Questions (the FOrkQ) and moving to the core system, where you battle a god, and combat, glorious combat! Now in this and previous Ork! articles we’ve tried to get across a certain vibe, where the game is supposed to be goofy, fun, and open-ended, but some of you will still want to ask dumb questions like, “How does the system address the narrative premise?” Smart things like this sound like science, which in Ork! is traditionally punished by murderous, anti-science trolls. (In the rough and tumble World of Orkness, only trolls, with their entirely fictional ability to regenerate, can get away with anti-science beliefs that keep them from vaccinating their troll-cubs. The rest of you, vaccinate your kids!) 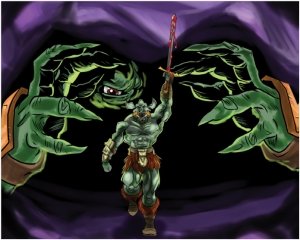 Nevertheless, this question has a two-pronged (two-tusked?) answer! We have ork points, the carrots, and Cheats, the sticks that look like carrots. Let’s talk about how these rules work.

Krom is almost always watching! Remember, the god of the Orks treats his creations with amused animosity. He wants orks to get into trouble, but also roots for them if they solve problems in the most orky ways possible, with brute force, ignorance and a bit of barbaric panache. The criteria are simple in description yet vast in creative depth, for the Orkmaster (the Game Master of Ork!) represents Krom at the table, and if they’re amused, Krom is amused! Thus, to represent Krom’s fleeting favor, the Orkmaster hands out ork points.

Ork points have several applications. They can make actions more effective, heal damage, and be spent to avoid Krom’s Curse when orks dabble in magic. The Orkmaster should grant ork points frequently, and players should spend them almost as frequently—and we say almost, because there may be a catch. You can also use ork points to add permanent improvements to your ork, but in the meanest, most classically orkish Ork! games you must choose between spending them on the spot and saving them to advance. This simulates the instant gratification temptations felt by all orks, and how it leads to bad decisions. However, we know this is just too much for some groups, so this hardcore option is presented alongside another, where you can still use ork points you spent in advancement. The Orkmaster picks which option they want for their campaign.

One of the new things in this edition is character Cheats. In Ork! a Cheat can be seen in part as a counterpart to the specializations characters in other RPGs develop, but let’s face it: No ork ever learned the Quivering Palm after dedicated training. Orks are not studious but boy, are they ever stubborn—so stubborn, in fact, that in one subject dear to their hearts, they will themselves to overcome Krom’s opposition. In fact, they steal power from Krom!

To make a Cheat, you take a skill and define one subcategory of what it can do, such as swinging one type of weapon or using the Jock skill to climb. When it’s time to use that subcategory, your Cheat lets you steal dice from Krom to make things easier. When the opponent is Krom himself, via environmental hazards, you take dice from the number you’re rolling against and add them to your own. Against enemies, you grab Krom dice from thin air to add to the number you roll. Defiance and might! YEARGH!

Is there a catch. Oh yeah. You see, if you Cheat, Krom eventually notices the discrepancy and takes those dice back, to add to roll opposing yours later. The Orkmaster is encouraged to build a little pile of these dice in front of each player. When it amuses Krom, the Orkmaster grabs those dice and rolls them alongside them normal difficulty dice, so rolling against 4d6 can turn into rolling against 9d6, if a foolish player accumulated five Cheat dice. Cheating creates natural comeuppances, which is also very much in keeping with Ork!

You Am Do Anything

Orktoberfest: Magic of the Orks!
Scroll to top Skip to content