Hey folks, Jack back again to talk about the our new Fantasy AGE Campaign Builder’s Guide. This time I want to talk a bit about the art in the book, how it comes to be, and its utility beyond just looking great.

So, with a book like the Fantasy AGE Campaign Builder’s Guide, where the focus is inspiring and guiding GMs with their own campaigns, art isn’t just cool, its potentially inspirational. Maybe that cool picture is just the spark someone needs to figure out the tone, style, or some element of a campaign that’s been eluding them. Inclusivity is also a concern; we want books that show a range of characters that will appeal to a diverse player base—not every dwarf looks like a short-bearded Scotsman and not every shining knight is a handsome European looking dude.

So how does the art get selected? Well, basically after the text is written and edited, it gets passed along to layout and art direction, which then tells the developer (me) what sort of art we need and where. This is generally both vague from a creative standpoint and precise from a technical one. So stuff like “We need a half page illo for this section” or “We need something for the start of each chapter in these dimensions” and so on.

Once I get those, I look at the text around where the art is to be placed and write up art descriptions like:

A trio of heroes are standing before a gigantic egg that sits in a nest of bones, vines, bits of smashed buildings, and other materials that present a feeling of menace. The egg is obviously thick shelled, mottled, and dark. It is cracking and something is beginning to emerge. Only parts of the creature inside can be seen, a glaring yellow eye, a scaly claw with some wet feathers along its length, and some tendrils or tentacles coming through certain cracks. The image here is very much that of a the birth of an alien and terrible thing. The heroes are very small compared to the vast egg and as such are mostly for scale, though one can be seen to be an armed warrior, one an archer, and another a spellcaster of some sort with a glowing rod. The scene is some vast underground chamber of which only some of it can be seen in the light of a mage’s rod and some glowing fungus around the cavern.

Often these descriptions have themes or tones I want captured. For example, a piece for a chapter about building monsters might have a scholar teaching monster anatomy. Or perhaps I want to capture the feeling of some comic cover, book illustration, or other inspiration from my own youth. You can see this in stuff like the M&M Cosmic Sourcebook, which I helped write some art descriptions for—several of the pieces in one chapter are homages to classic comic covers using Earth Prime heroes instead of Marvel and DC ones. I do this because I think this sort of influence, depth…call it what you will, shines through in the presentation of the art with the text of the book. And while I can’t make the art or lay it out? This is the part I can contribute—the initial set up for the artist to work their magic, so to speak.

Sometimes these descriptions reference other characters, books, etc… from Green Ronin itself, often mixed with some other piece of media I was enjoying or thinking about at the time:

A hero fights against a swam of vampire thralls. The area around is blasted and twisted, a place that resembles a post-apocalyptic version of a late medieval or early Renaissance Eastern European village, with some faces seen from those hiding inside crumbling buildings. The hero is the red headed swordswoman from page 17 of the FAGE Companion. She still has her massive sword, which she is swinging to catch a thrall or two as they try to leap on her. She has been scratched up a bit from the thrall’s claws, but seems to be holding her own. In the sky a faint red sun can be seen through layers of a cloudy gray sky–the idea is that something here or perhaps across the whole world obscures the sun enough to mute its effects on the creatures, meaning there is no true safe time in this world from such horrors.

I’ve become fond of that red-headed swordswoman in the Fantasy AGE Companion, something about the piece she appears in made me want to revisit her.  And then I watched Netflix’s Castlevania series and I decided she needed to fight vampires in this Campaign Builder’s Guide. Sometimes that’s just how it goes.

So then these descriptions are sent off to a freelancer artist who gives us a number of rough sketches to review. The art director and I (and often other folks) discuss which versions we prefer, often saying stuff like “Totally C instead of A or B but we need to work that charging velociraptor riding cavalryman from A in.” Sometimes this process is very quick, sometimes we go back and forth more, but in either case that’s just the process. Some of the best pieces in Fantasy AGE—in my opinion—were fast and easy from a feedback perspective. Others were long and hard, and just as amazing. In any event, the artists also add their own ideas, style, and embellishments. Sometimes an artist will present a piece that’s “wrong” from what we asked for in terms of an angle or action and yet its completely perfect and we love it. Other times great pieces get tweaked because they need to invoke something important from the book.

Anyway, once the sketches are approved and artist knows just what we want? They make the piece. Sometimes they share steps along the way, other times not. In any event, they eventually turn in a piece for approval and any final tweaks and adjustments are made.

So after all is said and done, the monster egg piece becomes: 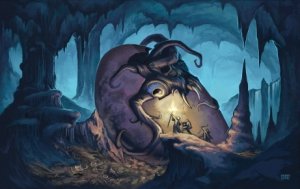 While our red-haired swordswoman fighting vamps is presented as: 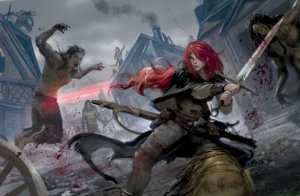 And that’s essentially how it works. Just for dozens of pieces of various sizes and dimensions. It’s at times a complex process, but I truly enjoy it.  Hopefully those of you checking out the Campaign Builder’s Guide will find pieces to inspire and delight you as well.

Through All Doors: Threefold’s Sodality, Part 2
Scroll to top Skip to content