In the Soul Trade, on an alternate Earth warped and twisted into a cruel imperial state, the conspiracy called Aethon begins its procedure to “delete” it from the Metacosm of countless planes, ridding it of a dangerous threat. On that doomed world and others, agents uncover crucial links to a hidden smuggling chain, one that could break the interplanar trade in souls wide open, and reveal the terrible price of that cruel, secret industry. 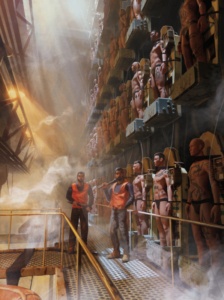 Every Soul Has Its Price

The Soul Trade is an adventure for Modern AGE characters levels 5 to 8 in the Threefold setting, though with some adaptation it can be used for other Modern AGE campaigns. For full use of the adventure, the Modern AGE Basic Rulebook and Threefold campaign book are required. Threefold is a Modern AGE setting of multiple worlds where magic, technology, and dark forces contend for the fate of all universes. Start here to look at articles covering all aspects of the setting.

This adventure can stand alone, but it’s also the third part of Five and Infinity adventure series, which takes your Modern AGE Threefold characters from levels 1 to 16.

Get Five and Infinity Chapter 3

Pick up the next installment of Five and Infinity: The Soul Trade at the Green Ronin Online Store or DriveThruRPG by clicking the links!