Last time in this series I introduced you to the Sodality: Threefold’s faction of planar explorers, diplomats and defenders of the right (at least by the standards of the Vitane transplanar alliance). The Sodality are one of two factions Threefold emphasizes as suitable for Player Characters, though it’s perfectly possible to run a game with protagonists from other groups. This time, I’ll talk a bit more about their recruitment and operations. 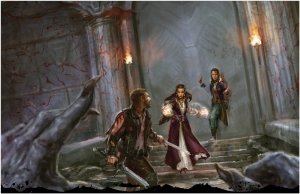 When the Emissary’s words fail and the Protector’s swords break, it’s up to the Explorer to find her Mission a way out.

Most applicants for membership are citizens of the Vitane, of course, since one needs to both know of the Sodality and have access to apply in the first place. Still, recruits from other civilizations are not barred. In these cases, the potential recruit may be unaware of the greater nature of the planes or even the existence of the Vitane or the Sodality If they handle the truth well, a formal offer is made for them to join. On occasion, the Sodality has even found it effective to recruit people who learn about the organization by accident. Before a recruit is formally accepted, they must undergo a series of tests referred to as “the exams.” Some are fairly mundane written or oral tests, or physical trials meant to measure the subject’s physical skills, such as sparring matches or athletic contests. Other parts can be quite esoteric, involving arcane illusions and psychic scans, including psychodramas where applicants encounter their worst fears.

Passing the exams qualified recruits to enter the Academy, an island school in the Staghorn Sea on Vigrith. Training time varies, and training is tailored to the recruit while covering the essentials: the nature of the planes, how to unlock nascent soul talents, diplomacy, tactics, and the ethos of the Vows, which bind Sodalts to defend the defenseless, attempt peaceful contact with civilizations, respect the value of life, and avoid infringing the freedoms of others. Mastering the skills of the various branches may lead to extreme abilities, such as an expanded understanding of Shabda, strengthened intuition, and an understanding of Vidyavira, the “universal language” of violence that supersedes all martial arts. Yet on many occasions, the Sodality values perspective as much as skill, and do not require these specializations in order to take the field.

Once properly trained, a Sodalt joins a Mission under the direction of a magister, who coordinates that group’s efforts with others.

Rendered with a capital M, a Mission is the standard Sodality operation unit: a handful of Sodalts with complimentary background working under a magister on various assignments. Well-integrated Missions eventually give themselves a name and a visual symbol; until then they’re often known by the name of the supervising manager (“Brionne’s Fifth,” for example).

Sodality Missions take on a wide range of operations. First, each Mission has one or more wide-ranging standing orders which the Mission, with the occasional help of their magister, interprets to create their own operations and goals. Examples of such orders include:

Specific assignments, as granted by magisters, supplement these general orders. Some Missions are in frequent contact with their magisters, while others must range far from the known planes, and only check in infrequently.

The following ranks exist in the Sodality.

Associate: Associate isn’t technically a Sodality rank at all, but an informal status assigned to non-Sodalts who assist the organization on occasion. Associates are sometimes called upon as “mission specialists” for particular situations where their skills or abilities are useful. Associate status is also commonly used at a magister’s discretion to try out potential recruits to see if they would be a good fit for the Sodality.

Pleb: Pleb is the common nickname for a student of the Academy, in between their status as a civilian or associate and a full member of the Sodality. Plebs are occasionally assigned to work with Missions as part of their education, although the Academy does not often put plebs into the field until they have proven themselves.

Neophyte: Neophyte refers to a new Sodalt, particularly one on probationary duty following graduation or induction.

Viator: Viator is the operational rank of anyone operating as part of a Mission, though most active duty members are addressed simply as “Sodalt,” saving the formal rank for special occasions. Viators within the same Mission do not “outrank” one another, and Mission leadership is decided by consensus or the assignment of the magister for the duration of a particular operation.

Warden: Warden is a particularly trusted Sodality rank, where a Sodalt is permitted to move between worlds freely at their own discretion. Some refer to warden rank as “wanderer” or “unattached” status, able to function more independently, although wardens are still assigned and report to a magister.

Beyond wardens, the Sodality is managed by magisters, monitors and at the very top, the Council of Intendants, headquartered in Cardinal House on Vigrith. These lofty ranks typically belong to supervisors, not front-line heroes, though individuals who hold them tend to be extremely competent.

The Sodality often conducts joint operations with Aethon, the security agency of Earth’s secret government, the Peridexion. We’ll talk about what these transhuman operatives do next time around.