It’s almost here! Kickstarter backers of The Expanse Roleplaying Game should be on the lookout for the PDF of Abzu’s Bounty this coming week. Pre-orders and PDFs will be available on the Green Ronin website soon after that, and those of you at PAX Unplugged will have a chance to get your hands on physical copies. All of us at Green Ronin want to give a heartfelt thank you to everyone who backed The Expanse RPG and made this possible. As my first development project for Green Ronin, bringing Abzu’s Bounty to life has been an exciting ride, and I’m really proud of the work the writers and artists put into making this amazing book. 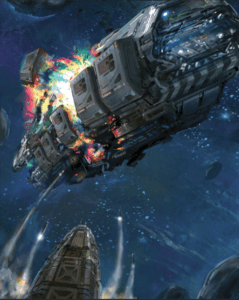 I’ve discussed many of the details in previous posts, but for those of you who may have missed them, here’s a summary. Abzu’s Bounty is a six-part, system-spanning campaign for The Expanse Roleplaying Game. The campaign can take place during the early Expanse novels (Levianthan’s Wake and Caliban’s War). The story opens with characters onboard an ice hauler collecting ice from the rings of Saturn. The crew discovers a strange silicate in some of the ice. The characters soon find themselves enmeshed in a conspiracy that takes them from Prometheus (one of the moons of Saturn) to the inner planets of Earth and Mars and places like Titan and Luna in-between. The book is full of NPCs and locations that are important to the Abzu’s Bounty campaign but could just as easily show up in your own stories. The campaign is designed in such a way that you can play it straight through or pick and choose the parts you want to add your own stories as the characters untangle the mystery. For a more detailed look at what you’ll find inside, check out my earlier posts.

I wish I could say more, but I can’t give away all of the secrets. I look forward to hearing about the adventures of the crews of the Abzu’s Bounty. I hope you all have as much fun playing it as we’ve had creating it.

Green Ronin Is At PAX Unplugged
Scroll to top