With Enemies & Allies for Modern AGE coming up for release in March (although the pre-order and PDF are available now!), I thought I’d briefly share the thinking that guided my development. On the surface, a book of NPCs and creatures seems pretty straightforward: Cram the game statistics in, do the art notes, and get it out the door (well, to Production, who turns it into a book instead of text files). This is exactly why I wanted to do Enemies & Allies differently. So here, in no particular order, are some ideas that shaped the book. Some were mine; others belong to fellow authors. 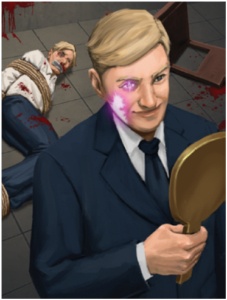 All he wants is you. The Chameleon borrows lives with the new extraordinary power of Psychic Shapeshifting, found in Enemies & Allies.

The most important thing about the book is that I wanted to provide ways to situate these characters and creatures in their respective genres. That’s why the book is divided into genre-based (covering fantasy, horror, elite modern operatives, cops and crooks, and science fiction), and each chapter begins with optional rules to make the genre work with the chapter’s entries and in Modern AGE generally.

Urban fantasy and horror are very closely related—so close that the point of difference can be a tricky judgment call. This is why I used the difference between magic and psychic powers in Modern AGE as a guiding principle. Fantasy creatures are generally categorized as magical, while entries related to the horror genre are linked to psychic phenomena. But since this is in some ways a division of convenience, Enemies & Allies gives you advice on switching things around.

Written by Matthew Dawkins, the Horrors and Witnesses chapter of the book is all about scary monsters and malevolent NPCs, but the content may be a bit different than other horror RPG offerings. Weirdly enough, this is because horror in roleplaying games tends to hang around the Gothic horror and Lovecraftian weird tale genres. We don’t disparage or entirely exclude those things—indeed, we include specific rules to enforce Gothic themes, if you want them, and the Anomaly is certainly a being out of a weird tale—but this book also harkens to pop-horror roads less traveled, from enemies that pull you into dark dreams to the dangerous results of covert paranormal research. Plus of course, ghosts.

Tanya DePass’ Science’s Edge chapter was designed to work with both contemporary and near-future games. We’re well aware that cyberpunk is a popular genre for RPGs, and for Modern AGE campaigns specifically, but we didn’t want to leave out games inspired by science fiction set in the modern day. Thus, the characters in this chapter aren’t stuck to any specific period. You might encounter the book’s Bioroid Assassin in a setting where part-organic androids are common, or in one where they’re built by a secret cabal—or sent back in time on a lethal mission.

Will Sobel’s Arcane Beings chapter, covering modern fantasy, doesn’t update classic fantasy creatures, but draws from recent folklore too. Legends not only persist, but are transformed and supplanted over time, and the chapter reflects that. It’s why the book has Quantum and Atomic Elementals, a mind-altering cryptid, and even the Headless Horseman, instead of just giving some elves guns and tattoos and calling it a day.

One of the book’s appendixes talks about converting creatures back and forth between Modern AGE, Fantasy AGE, and Blue Rose, and I outlined the book well aware of the fact that Adventure Game Engine Game Masters routinely convert things from one book to another. That’s why I asked the book’s authors to avoid repeating creatures covered in other books unless they were highly appropriate, or, like ghosts, the most essential legendary beings. This seems to have inspired some amazing creative decisions on the part of the team, including the authors of the chapters mentioned above, and it means that fans of multiple AGE games can enjoy some added value.