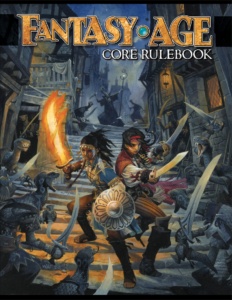 As Fantasy AGE fans know, we’ve been working on a Core Rulebook for the game for a while now. We decided it was time to bring together Fantasy AGE and Freeport, our signature fantasy city since 2000. More than that, we’ll be exploring many new lands in the world of Freeport through a setting concept called Stranger Shores. Once we had decided to put Freeport in the mix, there could be no other choice for the cover artist: Wayne Reynolds! 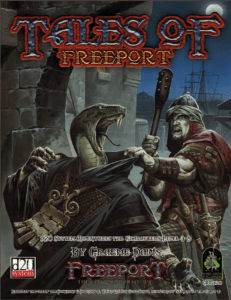 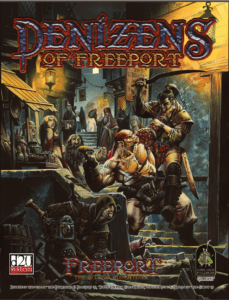 Wayne has been the signature cover artist for Freeport since 2003, when he painted the covers for both Tales of Freeport and Denizens of Freeport. Wayne just gets the look of Freeport and his previous covers helped to define it. We wanted the Core Rulebook cover to illustrate that Fantasy AGE and Freeport were coming together. My idea: take characters from both and have them fighting side by side in the city. Art director Hal Mangold worked with Wayne to make it a reality. 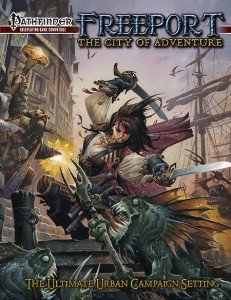 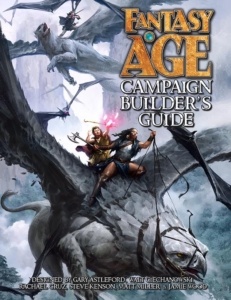 All the Fantasy AGE covers have featured a trio of iconic characters in perilous encounters. I suggested we take our iconic warrior and team her up with the pirate captain Wayne painted for the cover of Freeport: The City of Adventure. The foes had to be serpent people, a major element of the Freeport setting. You can see the results for yourself. As always, Wayne knocked it out the park. This is a cover worthy of our new Core Rulebook!

The Fantasy AGE Core Rulebook is scheduled to release in May of 2022. If you’d like to learn more about how it has been developed, check out episodes of ThursdAGE (also available on Youtube and Twitch). Each week the disembodied voice of Troy Hewitt chats with Fantasy AGE developer Owen K.C. Stephens, who gives advice about the game, the Adventure Game Engine that powers it, and answers your questions. Leading up to May, we’ll also have a series of articles exploring the Core Rulebook, so stay tuned.

Player or GM, the Modern AGE Mastery Guide is Here for You
Scroll to top Skip to content