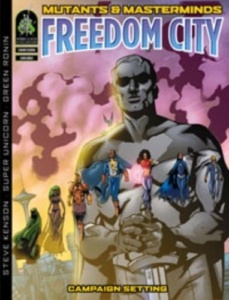 The Mutants & Masterminds RPG is old enough to vote this year. “The World’s Greatest Superhero Roleplaying Game” (tagline credit to the bombastic style of Stan Lee) turns eighteen years old in 2020, as well as Green Ronin Publishing’s 20th Anniversary! Alongside it, Earth-Prime, the official M&M setting also turns eighteen and, with the third edition of the Freedom City sourcebook that started it all released nearly three years ago already, one has to ask: “Where does the time go…?”

In his classic Strike Force superhero campaign, the late, great Aaron Allston offered a number of options for the aging of player characters: Allston had time pass in his campaign at roughly the same pace as the real world, so some characters were mortal and aged at a normal rate. Others were immortal and didn’t age at all, while various characters in-between had some forms of slowed aging or the like that kept them vital and extended their super hero careers. Good thing, too, since the Strike Force campaign lasted for over twenty years!

In the award-winning Astro City comic book series, author Kurt Busiek had time pass in the fictional city at the same pace as the real world: Astra Furst, in grade-school in the classic Astro City #4 in the mid-90s, graduated from college in Astro City Special: Astra in 2009. Born in the mid- to late-80s, Astra should be entering her mid-30s this year!

With inspirations like Strike Force and Astro City, Freedom City (and therefore Earth-Prime) also embraced the notion of time passing in the world and 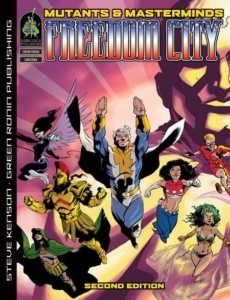 for its characters. When the second edition of Freedom City was planned, there was a mere three years difference between the first and second editions of the game. Therefore, I thought it would be fun to “update” things a bit, pushing the setting timeline forward by about that amount and having things like the teen hero Bowman graduating from Claremont Academy to “step-up” to membership in the Freedom League, Captain Thunder’s young (now teen) son attending the Academy and friends with the also-now-teen Chase Atom, and so forth.

The notion flowed through later M&M sourcebooks, such that when the first edition of Hero High came along, we introduced even more new “freshman” characters to replace the Next-Gen who were aging out. At least one of them (Elite of the Alterna-Teens) has gone on to become an adult legacy hero, taking up the mantle of the Raven in Atlas of Earth-Prime. By the time the third edition of Freedom City came along, some eleven years had passed since the second edition! That called for some changes, as readers can see, with ageless members of the hero and villain communities existing largely unchanged alongside others who have grown up, retired, or even left the mortal coil altogether.

Now, it’s likely that M&M will pump the brakes on the setting’s timeline a bit, given we honestly didn’t plan on it being around nearly twenty years later! Like I said, the most recent setting book is already three years old, and Green Ronin wants to play around a bit in that era, while giving you the opportunity 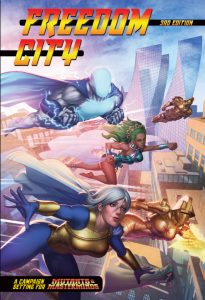 to do the same, without constantly having to update “current events.”

Of course, it may well be that some game groups prefer the “classic” versions of the Earth-Prime setting and its characters. Perhaps the notion that the Sentinels from Emerald City came along years after the Freedom League, or that the “new heroes” of the setting have actually been around since Emerald City was published in 2014, doesn’t fit with their expectations.

Since the setting is yours to do with as you and your game group prefer, fear not! Somewhere out in the Omniverse is a parallel Earth that follows the “10 years ago” model of most mainstream comics, which says that their major characters have been active for no more than a decade or so, regardless of how long their publication history may be. It was how the original Freedom City timeline was built, with the first major event of the “modern age of heroes” happening ten years prior. The current Freedom League can still have come about as a result of the Terminus Invasion, which still happened ten years ago, just in 2010 instead of 1993. The “classic” first and second edition Freedom City-era characters can still be at the peaks of their crime-fighting careers.

Who knows? Maybe in the infinitude of the Omniverse there’s a ten-year cycle where a new “age of heroes” starts, over and over again, on a new world and the “old” Earth-Prime is a place they occasionally visit to see glimpses of the future that might await them—as time goes by.