Mothers, lock up your sons: Rogues Gallery is coming. This hardback collects the 40+ Rogues Gallery PDFs in one collection, along with a dozen new villains and antiheroes to terrorize your campaign. Your heroes could fight one a week and still not finish by New Year! 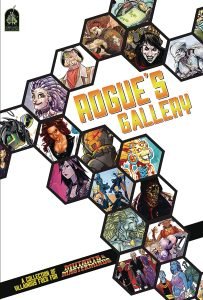 Villain books are a classic installment in superhero RPGs, going back to classics like Champion’s Enemies supplements or Heroes Unlimited’s Villains Unlimited. They provide opponents to fight, sure, but they also flesh out a side of the setting that heroes rarely get to see, and that hero-facing books rarely delve into. If superhero games, at their core, are about optimism and what one determined individual can do to help others, then villain books show the pessimism of those same worlds: What happens when someone, despite all their power, can’t or won’t use it to help others, or even themselves. Mutants & Masterminds has always been about nuance and complexity—every bit as much it tries to be about being your best self—and I think the incredible diversity of characters presented in Rogues Gallery showcases some of the best that Earth-Prime has to offer: Classic throwbacks to the Silver Age like Amalgam, Elzaya, and Tun; villains that seem to painfully mirror our real world like Drive-By and the newly returned House of Usher; cold professionals like Chakram and IGT-92; off-the-wall weirdos like the Candy Crew, Newt, and Explodo, and more than a few characters who came so close to being one of the good guys like Arctic Fox, Eminence, Freestyle, and Red Mist. This last category are probably the most vital, holding a mirror up to reflect the ugly failings of the world, and all the things the heroes, through luck or perseverance, have escaped. “There, but for the grace of God,” is a popular and heart wrenching theme in a lot of comic books; it provides a moment of introspection in a medium that is all too often about jumping between spectacular fight scenes.

To round out the collected edition of Rogues Gallery and the setting of Earth-Prime, we collected a dozen new antagonists from some of the brightest Mutants & Masterminds writers. With the book following on the heels of Freedom City, 3rd Edition, most of these new villains operate out of Freedom City, or at least mention it briefly, but the ultimate goal was to round out the villain list for several of our newest books, including the Cosmic Handbook and Hero High. Some are classics, many are brand new, but we tried to tie all the new villains into the advancing timeline of Earth-Prime, and the recent changes described in Freedom City. Here’s what’s in store:

And because you’ve all been waiting so patiently for this volume, here’s one of the new heroes to get you started: Princess Silverwing! 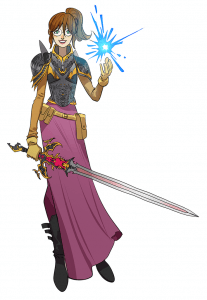