I was originally going to title this “The Lair of the Lazy GM” to get the reference to the new Fantasy AGE Lairs book in there, but decided that wasn’t fair, because it’s not a matter of laziness, but one of time. 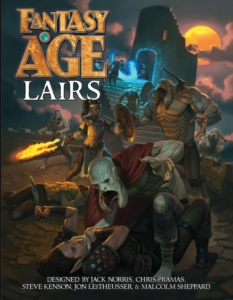 It should come as little surprise that I loved creating things for my various campaigns as a Game Master. It’s one of the reasons I eventually got into doing it professionally as a writer and designer. Thing is, when I was at the peak of my own output in terms of creating things for my games, I was in my 20s, living with most of my game-group as roommates, and without many of the more—shall we say “mature adult”?—responsibilities that I have now. In short, I had more time and energy to devote to that kind of thing, to say nothing of the fact that I didn’t do it for work.

Which is all a long way of leading up to talking about Fantasy AGE Lairs, which (like several upcoming Green Ronin products) addresses the issue that a lot of us modern-day Game Masters face: “I want to run a game, but I don’t have time to prep everything.” I know that my own games these days tend to focus on either: 1) Things that I’m playtesting for work, or: 2) Published adventures and campaigns I can use as-is with a little customization.

Lairs helps with preparation on a couple of different fronts. The first is simply that it offers eight complete and ready-to-play adventures, each of which could occupy multiple game sessions. But it’s more than just an adventure collection since, as the title implies, Lairs offers location-based adventures, detailing a particular place that is the lair or home of the main threat of the adventure. From the Valley of the Whispering Titans to the Peak of the Mithral Dragon, Fantasy AGE Game Masters will find a variety of places they can drop into their own campaigns, and possibly expand upon, reuse, or build on to create further adventures. Indeed, each location in Lairs also features a set of four to six ideas for additional adventures in that setting.

Lairs also expands upon the Fantasy AGE stunt system with Location and Lair Stunts, based on the qualities of a place and time rather than a character or creature, tying the acquisition and use of Stunt Points into where the characters are in the adventure as well as what they are doing. Even without this exciting new spin, it would be a useful book for a Fantasy AGE Game Master who wants adventures by and for Fantasy AGE that are ready for hours of gaming fun.

This book is your ally in winning the battle of the beleaguered Game Master and can make the difference when it comes to being able to run your own Fantasy AGE game.

Blue Rose Bundle at Bundle of Holding
Scroll to top