Andrzej was getting tired. He swept his greatsword in a figure 8, pausing to lean slightly to let a crossbow bolt pass him by and bury itself in the shooter’s friend, coming up the other side. He hated killing but the briefing said these people, filthy doublets, poor dentistry, and all, might destroy several universes. He hated killing, but something had hollowed their souls out, and it seemed merciful to dispatch what remained.

He wasn’t fighting alone. A vicious, pointy-eared, green-skinned little man covered his blind side with some quick knife-work. He didn’t know the fellow, who’d apparently been burgling the lair, shrine, or whatever Andrzej chased the cultists back to, barreling through the ramshackle streets of Freeport (crisis point of the plane designated NG-05522).

Andrzej parried an incoming cutlass, but an adjacent burly cultist sent him staggering with a belaying pin to the face, of all things. The little green man hid behind Andrzej as the cultist with the fanciest hat stepped forward and snapped a finger, wreathing her hand in green flame.

Comforted by training, Andrzej was ready for death.

“Let me show you glories to boil your eyes,” said the woman with the fiery hand.

Mei was an Aethon agent seconded to their group. She could keep Earth technology working on the weirdest planes. Mei appeared to be unarmed, on the other side of the doorway, with nothing but a tiny box on legs between her and the cultists.

Andrzej looked, gasped, grabbed the little green man, and hurled them both behind a sturdy pillar. The fire-handed woman took the bait and led the charge toward Mei, paying no mind to the box and its to-her exotic lettering, which said FRONT TOWARD ENEMY.

Yes, It’s time for another book and setting mashup, coming on the heels of Lost Ilium and Vaporwave Rose (Part 1 here, Part 2 here). This time around we’re doing an epic one, combining Modern AGE’s Threefold setting and the Freeport setting (through a Fantasy AGE lens) for world-shattering adventure! And because it’s a big tapestry, it’s a big article—no split this time. Drink it all in. 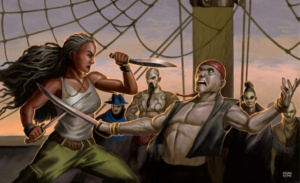 Ingredients: You need the Modern AGE and Fantasy AGE core rulebooks, as well as the Threefold setting book and the Pirate’s Guide to Freeport. The Fantasy AGE version of Death in Freeport and other Freeport books will also be useful.

Freeport. There are many cities by that name, but the Sodality, who explore the infinite planes, tracks legends about one of them with special care. The Divine Empire’s demigod-tyrants keep secret files on it too because It’s no mere legend to them. Where the Sodality suspects, highly placed imperial Optimates know: Freeport is where the fate of the Metacosm will be decided.

The plane Freeport stands in appears to be an Otherworld, where sorcery and wonders abound, but it’s really a “hell,” or Netherworld, and had an Alastor: what the less educated call a “demon prince.” This being, the Great Serpent Yig, might have been unique among its kind: amoral, but lacking the instinct to torture the inhabitants of its realm.

This made its plane vulnerable to attacks from enemy Alastors, and even the primal energies of the Netherworlds, where reality unravels unless bulwarked by sacrificed souls. Yig sought sanctuary by pushing even deeper into the outer dark, further than even rival demons typically went. To prevent reality erosion, Yig reshaped its plane, giving it the power to seize parts of planes which possessed stronger natural laws. Freeport now exists on a patchwork plane at the furthest edge of the Metacosm.

A being imprisoned in this final darkness saw the lonely light of the plane. All this Unspeakable One needed to do was to whisper certain ceremonies in the dreams of Yig’s mortal children, the serpent people. They had become mighty sorcerers, and rulers of the Valossan Empire, claimed from a continent said to be Yig’s body. But the whispers taught the powers of the Yellow Sign, and its students founded a cult whose grand ritual destroyed Valossa, the empire, and perhaps Yig along with it (though death is always different for gods). Even so, the ritual was incomplete, because it failed to bring the Unspeakable One to the plane. But with Yig fallen, the intruder gained partial, weakened control of the plane’s ability to tear pieces from other realms.

This was enough to slowly tear away part of the Otherworld called Kalakuth, but in the process, the Unspeakable One abducted the Ghul, a Prefect of the Divine Empire and demigod of death, and the Herald, his shapeshifting consort. After determining no nearby gates survived the transition, and that he couldn’t return home, the Ghul set about conquering the plane’s largest landmass, simply called “the Continent.” The Herald could transport themselves to other planes, but no one else, and the Ghul bade them to stay, and keep the conquest a secret. Thus, the Ghul founded the Empire of Ashes as a personal dominion.

By ravaging the Continent, the Ghul unwittingly fed souls to the Unspeakable One, and improved the state of sorcery, which had fallen since the destruction of Valossa. This revived the Cult of the Yellow Sign, which set about undermining the necromancer’s empire. Eventually, the Empire of Ashes was as dead as the shambling legions that served it.

The new pirate city of Freeport profited from raids in the vulnerable, lawless Continent. It grew on A’Val, an island remnant of old Valossa. The Cult of the Yellow Sign followed wealth and the possibility of serpent people lore there—but the long-lived Herald, who survived the fall of the Empire of Ashes, followed. The Herald learned the truth: The Cult’s ultimate goal was to summon the Unspeakable One, who would then gain full control of the plane’s world-eating powers. Freeport’s plane would become a cosmic predator.

The Herald used their powers to flee to Alatum, capital of the Divine Empire, but its rulers were too consumed with politics and rivalries to listen. So, the Herald traveled to many other planes, leaving rumors and clues—nothing firm enough to mark them as a traitor to the Empire—about Freeport, the Unspeakable One, and the world that eats worlds.

As rollicking life in the City of Adventure continues, factions on other worlds plan infiltrations and invasions. Ambitious Nighthost captains see another Netherworld to conquer, and a weapon that could further their mission to liberate them all. A few fringe war-furies in the Divine Empire see the key to conquering the Otherworlds, even arrogant Earth, and claiming the throne. A circle of Sodality wardens wants to preserve Freeport’s unique plane, standing up for its people, an eliminate the threat. On Earth, a highly placed member of Aethon reads secret reports, and inspects locked cryochambers containing apocalyptic living weapons.

So far, these groups have only been able to plan. Freeport’s plane has no known gates, and if there are any, it is extremely likely they pass through multiple Netherworld hells. The Herald cannot transport others, and the Ferrymen, a faction who can, doubt the tale. But it is only a matter of time until the status quo changes. These groups will either find a way, or the cult of the Yellow Sign will make further progress, and the Unspeakable one will reach out to feed.

There are two was to run this one. The first is as a Fantasy AGE campaign set in Freeport that undergoes a sudden turn when people from other worlds appear, eager to stop the Cult of the Yellow Sign. You can use this to shift your game from traditional fantasy adventure into plane-traveling portal fantasy, and you can even introduce elements like modern technology. The key to defeating the Unspeakable One may lie in a distant realm, whether it’s an artifact, spell, or the consciousness of Yig, flung to some distant world. Note that the Freeport setting here isn’t “canon” Freeport, since it redefines and tweaks several things, such as by saying the Ghul was a renegade Optimate from the Divine Empire.

On the flipside, you can use Modern AGE and Threefold to send a Mission or other group of plane-travelers to Freeport, to soak up its rough charms and mind-searing dangers. It’s hard to get in or out of Freeport’s plane, so there’s plenty of time to enjoy the rum-soaked ambiance while hunting followers of the Unspeakable One.

Modern AGE and Fantasy AGE are largely compatible, though if you use Toughness and Modes, they should apply to characters from both games. Focuses, talents, and specializations are largely cross-compatible, though the GM should consider carefully before allowing Fantasy AGE characters to take Modern AGE talents that mimic class abilities, such as pinpoint attack. Weapon proficiency doesn’t exist in Modern AGE either, so assume characters made with that game are proficient in weapons that inflict up to 1d6 (plus inherent weapon bonuses) per point in the abilities they are used with, so a Fighting of 2 permits proficient use of Fighting-based weapons that roll 2d6 (such as a long sword) for damage before other bonuses. A few other minor tweaks may be required, but nothing too onerous.

The Herald is intentionally designed to be an easy NPC to insert into the game, because they can go or be anyone—even a longtime NPC contact, if the GM wants. But even though they can travel the planes without a gate, they can’t take anyone with them, to preserve the plane travel rules that bind other characters, as mentioned here and in Threefold.

Finally, Freeport’s plane has the following profile in the Apocalypse Freeport campaign.

Incessance: +5 versus technology, +1 versus the occult. Technology developed within the plane by natives is unaffected, as seen in the emerging use of firearms.

Library Summary: Analysts estimate an 86% chance “Freeport’s Plane” exists due to the reliability and consistency of accounts. According to these accounts, the plane can absorb regions from other planes and is contested by multiple divine entities. A gate chain has yet to be defined. Technology generally does not exceed Earth’s 17th century, and local variants of known human types, with examples such as “dwarves” (and confusingly “humans,” used solely for the local jana subtype) are commonplace. Governments tend to be unstable, and magic use is common. Extreme caution is urged.