The Expanse RPG tweaks the damage system from the AGE System a bit by changing Health to Fortune, a measure, not of how healthy and durable characters are, but how lucky and “important to the plot” they are (the durability aspect gets covered by a Constitution-based trait called Toughness instead). The “ablative” qualities of Fortune remain the same: players spend it in order to reduce or mitigate the damage their characters suffer. If an attacker rolls 10 points of damage, a player can spend 10 Fortune points, and the character escapes any serious harm—that time. Of course, players can also spend Fortune to improve their characters’ chances of success with tests and, sooner or later, their luck is going to run out. 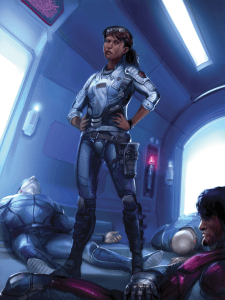 If Fortune isn’t enough to completely spare a character from damage, then it is going to hurt. The character is either going to be taken out (see the following) or needs to take an injured or wounded condition to reflect the remaining damage.

If damage remains after applying Toughness, Fortune, and taking an injury or a wound, then the target is taken out of the encounter. The attacker may choose to impose any one condition reasonable for the type of attack which takes out the target. So, for example, an attacker may choose to take out a target with a gunshot and leave them dying, just wounded, or even just unconscious. The key point is that the attacker decides on the target’s condition.

An Expanse character can also choose to roll over in an encounter. In essence, the character’s player chooses to take that character out of the encounter, except the player chooses the character’s condition, subject to the approval of the GM, rather than leaving their fate up to their opponent. Rolling over is a “live to fight another day” tactic for when it’s clear a character is overmatched and doesn’t have much of a chance otherwise. You can only roll over in an encounter before you are taken out. Once you begin applying damage from an attack that has the potential to take you out, it’s too late to roll over, so choose carefully.

If you want a slightly more lethal Expanse game, consider the following option: In any situation where one character has another “dead-t0-rights” the target character cannot spend Fortune to eliminate damage, all damage must be accounted for with Toughness, injuries, or wounds, and any excess results in the character being taken out, as usual. Standard situations where a character is dead-to-rights include being completely surprised by an attack (such as shot by an unseen sniper, for example) or having the helpless condition, completely unable to avoid an attack or hazard. It’s up to you to define situations that leave a character dead-to-rights, and to tell the players in advance. For example, if you want them to respect guns, make it clear that having someone holding a gun on you means they have you dead-to-rights, unless you can somehow distract their attention. This means characters will probably be less likely to rush armed opponents, for example. Try to use this option as a tool to help the players make informed decisions about the risks their characters take.

The Expanse: Questions of Canon
Scroll to top Skip to content