So, by now, I’m sure you’ve all seen the announcement about Nisaba Press’s first novel, Shadowtide, by Blue Rose’s own, beloved Joe Carriker. Joe turned the final manuscript over to me a couple of months ago, and I worked on the edits while I was in New Orleans for a convention. Readers, this book is lovely. It’s full of intrigue, adventure, and chosen family, led by a smart-talking rhy-crow and a grieving Night Woman. 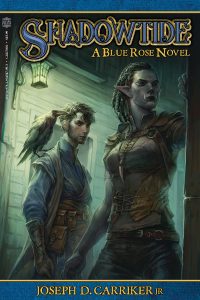 The book is now in production’s hands, along with the interior art order. It’s going to be pretty amazing, and I couldn’t be happier with the first entry in Nisaba’s novel line.

But now that Joe’s novel is into production, let’s talk about what we can look forward to next. Nisaba’s fiction is currently focused on our three internal settings, Blue Rose, Freeport, and Mutants & Masterminds. With a Blue Rose novel out, what could possibly be next?

How about a Mutants & Masterminds novel, penned by Aaron Rosenberg? Aaron is an experienced novelist who is familiar with tie-in and game fiction, having written for properties including Star Trek, World of Warcraft, Stargate: Atlantis, Star Wars, Warhammer, and Eureka. He’s written for a number of game properties, too, including several supplements for Green Ronin. His combination of game and novel experience made him a great fit for our next Nisaba novel.

Coming in fourth quarter 2018 from Nisaba Press, Height of the Storm is a novel about a teenager who gets caught in a storm, and wakes up with a big choice to make. We’ve been through the first round of edits, and the manuscript is back with Aaron for a final writing pass before the copyedit phase starts. Hal has the cover art notes, and we’re looking forward to initial sketches.

In the meantime, check out our short fiction, and keep an eye out for an announcement of the upcoming Nisaba Journal, our first collection of short fiction. The Journal will be produced bi-monthly, containing 4-6 short stories in the featured settings, and available in our web store. The August issue includes stories from Richard Lee Byers, Tiffany Trent, Michael Matheson, Dylan Birtolo, Rhiannon Louve, and a prequel to Height of the Storm from Aaron Rosenberg!

Thanks for reading, folks. I’m super excited to bring you the next round of fiction set in Green Ronin’s worlds.

Jaym Gates is an editor, author, and project manager based in Seattle. She has edited titles including Broken Time Blues, Upside Down, Strange California, Legends of Strategy, Eclipse Phase: After the Fall, Genius Loci, and War Stories. Her fiction has appeared in Goldfish Grimm, Grendelsong, M-Brane SF, and many more, as well as in her short story collection, Shattered Queen. She acquires and develops fiction for Falstaff Books and other clients. She is the Line Manager for Nisaba Press, and Green Ronin’s Editorial Coordinator. You can find out more about her at jaymgates.com, or on Twitter as @JaymGates.