For the release of Green Ronin’s Chronicle System as the Sword Chronicle fantasy RPG and setting, a lot from its earlier incarnation as Song of Ice and Fire Roleplaying (SIFRP for short) was preserved, but a few things have also changed. One of those most notable things is the inclusion of sorcery. 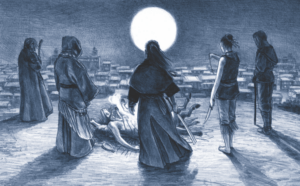 Magic in SIFRP was a rare and mysterious thing, the province of a few unusual qualities and not much more than that. For Sword Chronicle we needed a more robust system of magic, suitable for everything from hedge-witches to scholarly thaumaturgists and the adepts of spiritual mystery cults. At the same time, the system needed to be more rooted in the kind of fantasy chronicles the system was designed to tell, rather than the notion of spell-caster as “mobile artillery.”

As the beginning of the Sorcery chapter of the book notes:

Sword Chronicle sorcery is not the overt, flashy spells of many roleplaying systems. It is a “lower” sort of magic, without the pyrotechnics, earth-shaking manifestations, or epic reality-altering of “high-magic” fantasy systems. In fact, many sorcerous Arts provide effects that could, to the skeptical eye, be regarded as coincidence, chicanery, or some combination of the two. Indeed, the price of many of these Arts is so high that even true sorcerers often resort to sleight of hand, tricks of chemistry, and taking credit for things that are genuinely coincidental, in order to avoid paying it.

Fortunately, we had a working basis to start from in the form of Joseph Carriker’s Chronicle of Sorcery release for the Chronicle System, which outlines the essentials for a system of sorcery. Sword Chronicle takes that concept and runs with it, expanding it out into an essential system for magic-workers of all kinds. The “price” mentioned in the introduction previously is Destiny, the Chronicle System “currency” of character potential. Sorcerers harness the power of Destiny to influence and change the world through their Arts, in both subtle and profound ways.

What are those Arts? Sword Chronicle outlines four, each with its own magical Works:

Each Art has its Works, which range from quick-and-immediate spells to more complex and powerful rituals, from an immediate Castigate spell to wrack a target with pain to a more involved Rite of Cursing to destroy them from afar, from an immediate Blessing, to the Consecration of a great temple or Investiture of an enchanted blade, intended to last a lifetime or more.

Of course, in addition to Destiny, true mastery of sorcery requires a significant investment of a character’s qualities, and sorcerous qualities determine what Arts a character has learned, or mastered, much like fighting styles and other qualities that define characters in the Chronicle System. Indeed, there are also some qualities suitable for characters who have just a touch of magic, like the Beast-friend, the seer with Prophetic Dreams, or the chosen of Destiny with Prophetic Alignment.

So whether your concept for a Sword Chronicle character is a wise elder wizard, a cunning woods-witch, a zealous warrior of the faith, a rune-crafter, or the former member of a secretive cult, you can create them and their arcane Arts in the Chronicle System.