Our recently announced Sword Chronicle roleplaying game varies from classic fantasy RPGs in several respects. In many games, you play a rag-tag group of wandering adventurers, looking for justice, glory, and gold as you wander from place to place. You can do that in Sword Chronicle, but even classic adventures take place in a quite different framework. 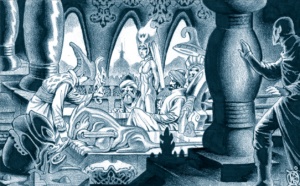 You Belong to a Noble House

By default, Sword Chronicle player characters all belong to one noble house, battling for survival and even supremacy. In fact, you and your fellow players will create your house together, settling on its strengths, weaknesses, customs, and even its favored symbols.

While you play members of a house, and control it in common, you are not necessarily the house’s leaders—in fact, you may not even be in line for the throne.

You Are Not All Equal

In many fantasy games, player characters who adventure together have roughly equal social status, but this is not necessarily the case in Sword Chronicle. Status is a game statistic, and it varies between individuals just like physical strength or skill at arms, though increasing status can be a tad trickier. Some characters may be the children of the house’s rulers, while others may be knights, bound by oath—and still others may be household servants.

This means that in the wider society to which the characters belong, some characters expect to be able to order others around. In private, the situation might be quite different, as young lords may strike an imperious attitude at court, but do what their advisors tell them in private. While your character belongs to a house, they may be servants, not rulers. This not only presents the challenge of working as a more hierarchical, cohesive group than many games allow, but it presents opportunities to subvert the hierarchy, because there’s more to power than status.

Because feudal societies pass power from parent to child, your characters will often be related. Not only that, but as this makes the passing of generations important, your character must have a definite age, instead of belonging to the rough late teens to twenty- or thirty-something standard of many games. You may choose an elderly character or a child.

You Can Be Manipulated

Unlike many games where you always have the final word over what your character says or does, Sword Chronicle includes rules for intrigue, where clever words and other inducements can manipulate your character into doing things that aren’t necessarily in their best interest. This isn’t to say your character might be made to do something against their will. Intrigue isn’t magic. It’s simply the art of convincing someone that what you want happens to be either what they also want, or at least must accept in order to further their interests. Many games have similar systems, aimed at characters controlled by the Narrator. In Sword Chronicle, player characters can also be influenced this way.

Like combat, intrigue has a set of rules and a choice of tactics, and your character can, if they wish, get better at it over time. However, there are some limits in place to keep these rules from being misused to ruin players’ fun and sense of comfort with the game.

Since you represent your house, your actions can take place on various scales. Your character might be absorbed in an individual action such as climbing a cliff; engaged in a group effort like a battle or an attempt to sail for a safe harbor; or involved in maneuvers intended to improve the political position of your house.

Different rules handle different scales. This is why, for example, Chapter 9 discusses individual combat—what happens in back alley brawls and duels of honor—while Chapter 10 provides the rules for mass battles. Similarly, your rewards aren’t just for your individual benefit, but can be channeled into improving your house’s capabilities.

Claim a Throne in the Shattered Era

For those of you who know the Chronicle System from the A Song of Ice and Fire Roleplaying Game, this structure is old hat—or crown, maybe. But Sword Chronicle offers a new setting, the Shattered Era. Next time, we’ll talk about that!