This week sees the release of NetherWar, Part 2: The Pentagram Peril, the segment of the mystic-themed campaign for M&M that I helped to write. I say “helped” because Pentagram Peril wasn’t originally planned as part of a series at all. It was a stand-alone adventure involving the Factor Four and Hellqueen going after some magical treasures when I originally wrote it. But when M&M Developer Crystal Frasier came up with the NetherWar series, the concept fit right into it, so Crystal worked her own particular magic upon my original adventure to make it suitable as a chapter in the series and … voila! The Hellqueen’s scheme now fits into a larger plot involving Earth’s magical power and legacy. 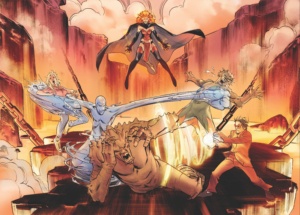 Speaking of larger plots, Crystal and I were talking for a Mutants & Masterminds Monday broadcast a while back about other magical villains who could fit into the NetherWar series, and Pentagram Peril would be an interesting place to include Dr. Azoth and his Homunculi (from Threat Report, also featuring in the M&M novel Roadtrip to Ruin) as additional or substitute foes. While it would be possible to replace the Factor Four with the evil alchemist and his minions, an even more interesting option is to have Dr. Azoth after the Bloodstones of Vhoka as well!

Perhaps the confrontation at the museum with the Factor Four plays out as-written, but the earlier theft of the other bloodstone from Freedom City University was actually carried out by the Homunculi, leaving each faction with one bloodstone each to start.

This turns all of the middle scenes of the adventure into a three-way competition for the bloodstones between the Factor Four, the Homunculi, and the heroes:

Since it’s likely only some of the stones will end up with each faction, the final confrontation at the Maw of Vhoka is both for control of the artifacts and to cast them into the Maw to release and control their accumulated power. It’s possible for multiple villains to gain additional power from the bloodstones, or maybe it is a struggle just between Hellqueen and Dr. Azoth, each using their minions to run interference, as well as summoning bloodstone gargoyles to aid them.

You can also decide if Dr. Azoth is an interloper interfering in the larger scheme of NetherWar or just another part of the larger plan, perhaps a “back up” to ensure the scheme involving the bloodstones is successful, should the Hellqueen and the Factor Four not prove up to the challenge. Either way, the added villainy is sure to make Pentagram Peril even more perilous!

Sagas of Sword … and Sorcery!
Scroll to top Skip to content