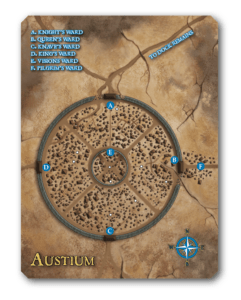 Envoys to the Mount is a full-length Blue Rose chronicle that takes players from origins as newly-graduated envoys of the Sovereign’s Finest to heroes of the kingdom of Aldis. The threats they face as part of that rise are dire and deadly, but perhaps none are more so than the wickedness of the lost city of Austium.

Once the capital of Faenaria, Austium was ground-zero for the Doom that destroyed the homeland of the folk who came to be called the Roamers.

Today, Austium is a Shadow-corrupted place, with four cabals of monstrous evil crouching in the ruins of the city. Above them sits arguably the most powerful darkfiend to ever slither out of Shadow into the world of mortals, the entity known only as the Lord of Austium.

Author Steven Jones did a spectacular job of detailing Austium, giving us a place that is not just a seemingly unending source of threats for Blue Rose heroes, but creating a place that seems to live, breathe, and positively bristle with potential threats. Because I do love me some hags and witches, I’m sharing the Coven of the Iron Cauldron here!

The Coven of the Iron Cauldron

The Coven of the Iron Cauldron is composed of sorcerers, hags, and other beings gifted in the arcane arts. It is immensely powerful and concentrates on uncovering the city’s lost lore with the intent of twisting it to the Shadow’s ends. While both the Guild of the Tarnished Coins and the Order of the Bloody Blades are larger, no other faction holds as much sway in the city with the Lord of Austium as the Coven of the Iron Cauldron. 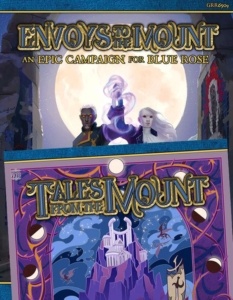 Don’t forget to pick up a copy of the Tales from the Mount fiction anthology as well!

Since this faction’s focus is on lost lore and the secrets of sorcery, they give little thought to the activities of the other factions and do what they can to remain neutral in their political games. When the Coven does get pulled into these powerplays, it’s usually due to some Guild of the Tarnished Coins’ scheme; these political maneuvers have created some animosity from the Coven towards the Guild.

The Coven was formed and is led by the Inside-Out Lady (one of the Talons), and since its early days, the Coven’s power has grown greatly. It was instrumental in raising Austium from the wastes of the Shadow Barrens. Since the Inside-Out Lady is kept occupied in service to the Lord of Austium, most of the daily duties of running the Coven fall on the Inner Circle, which consists of the Coven’s other founding members who are still alive and in Austium. Three members of the Inner Circle—Cendis, Doromin, and Lady Viddia—can be found in Appendix 3; Narrators should feel free to add additional members as they see fit.

The remaining faction members are structured into lesser circles consisting of three or seven members, and it is common for these lesser circles to have a low ranking darkfiend in their service. Most of the lesser circles choose one of the exarchs as their patron. Among the lesser circles, there are rumors of former Inner Circle members who clashed with the Inside-Out Lady and were forced to flee Austium or be destroyed.

The Coven holds dominion over the eastern section of Austium (the Queen’s Ward), with the coven’s main rites taking place in a ring of standing stones on Cauldron Hill, located close to the Tempest Gate. The lesser circles all have their own ritual spaces throughout the twisted mockery of the city.

Be sure to check out our previous articles previewing what you’ll find in Envoys to the Mount! And while you’re at it, don’t forget about our Year End Sale! going on right now. There are quite a few books and adventures in the Blue Rose line available, just in case you have any gaps in your collection!