When Troy Hewitt (the disembodied host of Mutants & Masterminds Mondays, amongst other schemes) asked me to compiled a list of “Steve Kenson’s Top 5 Green Ronin products“, that constituted a challenge, because I’m terrible at self-promotion and felt like it would be disingenuous to pick products I’d written the majority of, or had a substantial hand in designing or developing. So I’ve tried to steer clear of those things on this list, since I contribute to a lot of Green Ronin’s products.

I’m also focusing on products currently available in the Green Ronin Online Store, rather than the company’s entire twenty year history—maybe another “Top 5 of All-Time” or “Top 20 of the last 20 years” list is something to revisit at a later date. Lastly, I’ll note that my list is in alphabetical order by title, rather than being ranked from 1–5 in order of preference, because I’m lazy and had a hard enough time narrowing things down to just five products. 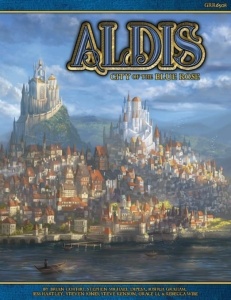 Aldis: City of the Blue Rose

I love city books—as anyone who is familiar with Freedom City knows—so the Aldis: City of the Blue Rose sourcebook could have been written just for me. It describes the center of Aldis, the default setting of Blue Rose, in loving detail, jam-packed with characters, local flavor, and adventure hooks, such that you could run a whole Blue Rose game where the characters hardly ever left the city. I’m also quite happy with my own contribution to the book, the introductory adventure “The Case of the Rhydan Swine.”

Envoys to the Mount

Envoys is the first full-fledged campaign book for Blue Rose Romantic Fantasy Roleplaying and offers a series of adventures leading up to an epic conclusion, with some breathing room to add in other “side” adventures, either of your own creation or various stand-alone published adventures. One of my favorite elements of Envoys is the establishment of various character “roles” for the series—like the Envoy, the Historian, and the Rhy-Bound—which you can “cast” with your own characters. The adventures then provide prompts for subplots and other story elements involving those character roles. 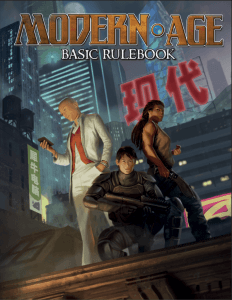 I sometimes feel like the Modern AGE rulebook is an under-appreciated implementation of the AGE System rules, because it packs a lot into a fairly slim rulebook: enough character design and game-play material to run countless campaigns ranging from the early-modern (Industrial Revolution) era up through the near-future or even far-future science fiction (although the latter may benefit from some stuff in The Expanse RPG, which was developed concurrently with Modern AGE). With the inclusion of arcane and psychic powers in the book as well, Modern AGE is also a system for urban fantasy or “secret powers” settings in any of its various eras. It’s hard to beat in terms of bang-for-your-buck game-play value.

Mutants & Masterminds developer Crystal Fraiser has done some great stuff with the game: launching the Astonishing Adventures series (which has already produced more adventure content for M&M than we managed in all the years prior combined) and developing the terrific Time Traveler’s Codex, but my favorite is a project that could have only been developed with Crystal’s vision and guidance: The Mutants & Masterminds Basic Hero’s Handbook. Because sometimes, as a designer, you really need someone else to come along and lay out how the whole thing works. This book does that. If you have ever been intimidated by the rules or character design of Mutants & Masterminds, well, this is the book for you. It’s easy, accessible, and gets you right into creating a new hero in minutes and ready-to-play. Plus it is 100% compatible with the Deluxe Hero’s Handbook rules, so everything you learn is of value. I especially love the comic book examples of game-play that really bring the rules to life while providing clear and concrete examples.

Because I’m a fairly jaded tabletop gamer, it’s not often that I get excited about a new game world or setting, but the Threefold setting for Modern AGE drew me in from the get-go with its concept and depth. It’s a meta-setting of sorts, in that it encompasses a “metacosm” of parallel worlds, a manifestation of the breadth and depth of the Modern AGE rules themselves. But Threefold goes further in setting up a unique and detailed cosmology that puts particular spins on the manifestations of magic and psychic (occult) powers, along with creating unique character backgrounds. Developer Malcolm Sheppard pitched it to me as “John Wick and Harry Potter team up to fight Satan’s robots” and I was in from that moment on. Personally, I’d change “team up” to “join Starfleet and Stargate Command” because, yeah … it’s like that. Check it out.